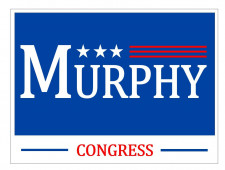 "I have spent the last 40 years of my career in the tech industry, not on Capitol Hill, being a disruptor helping companies and institutions reinvent themselves, and that is exactly what I will do once I am elected to serve the great people of North Carolina's 1st Congressional District," stated Brad Murphy. "For far too long, Democrats have ignored the hardworking people of our rural communities, and as a Congressman I will put America first, including leading the fight to secure our southern border, restoring parental rights to our children's education, and prioritizing broadband and healthcare innovations. Finally, I am the only Republican candidate for Congress who brings a vision and track record for how to build thousands of lucrative new economy jobs for our rural population in eastern North Carolina," added the political outsider and global innovator.

The Republican Primary Election will take place on May 17 with early voting lasting from April 28 to May 14. To learn more about Brad and his campaign, visit www.BradMurphyForCongress.com.

Brad Murphy was raised in Raleigh, NC, and graduated from Millbrook HS. He enrolled in the engineering program at NC State and left school to pursue his first tech startup opportunity in the emerging 1980s software industry. Nearly 40 years later, he has founded three globally successful technology startups, serving some of the world's largest companies and innovative employers. Brad and his wife Julie are residents of Warren County and are the proud parents of two adult children and NC State grads.