Teaming Up to Promote Drug-Free Living

Brussels drug prevention group joins forces with organizers and athletes of West African football tournament to reach players and fans with the truth about drugs. 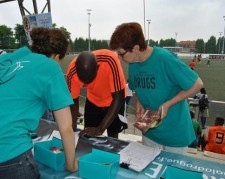 Brussels, Belgium, August 16, 2016 (Newswire.com) - At the launch of the Navétane 2016 Football Tournament, organized by the Association of Supporters of Senegal and Belgium, the Say No to Drugs Association of Brussels set up a drug information booth to educate fans and players on the truth about drugs.

Athletes from the West African nations of Senegal, Cameroon, Guinea, Mali and Niger vied for the championship trophy.

The volunteers invited the athletes to sign the Truth About Drugs Drug-Free Pledge and to set the example for youth by encouraging them to put their energy into sports, not drugs. They briefed the coaches and athletes on the most commonly abused drugs and gave them copies of booklets and videos to share with their friends and families.

Volunteers and athletes were eager to arrange follow-up activities including drug education workshops for youth in the athletes’ communities.

The Brussels Branch of the Churches of Scientology of Europe supports the Say No to Drug Association, which uses the award-winning The Truth About Drugs booklets, public service announcements and feature length documentary.

It has been conclusively proven that when young people are provided with the truth about drugs—factual information on what drugs are and what they do—usage rates drop commensurately.

Read the article on the Scientology newsroom.

We Can Do This L.A. Says a NoHo Mom
Things are looking up with Wednesday's announcement of additional Los Angeles reopenings. But county health officials warn the pandemic isn't over—and what we do this weekend can make all the difference.
Scientology - Sep 6, 2020