Taking Action Against Crime at the Community Level

Residents in Seattle's Queen Anne neighborhood enjoyed the annual National Night Out block party at the Church of Scientology. 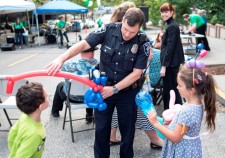 Seattle, Washington, August 12, 2016 (Newswire.com) - ​The Church of Scientology Seattle and the Seattle chapter of The Way to Happiness Foundation celebrated this year’s National Night Out Against Crime with a block party featuring live entertainment and barbecue.

Seattle has had a long history of supporting National Night Out, an annual campaign that promotes police-community partnerships, bringing neighbors together in the name of safer and better places to live. It is designed to heighten crime prevention awareness, increase neighborhood support in anti-crime efforts, and unite communities.

"As block watch captains for our area, we were happy to have the opportunity to throw a party for the neighborhood and meet some of the local residents. It was great to have those conversations about making the community safer for everyone."

In keeping with the purpose of the evening and to help spread the message of the rewards of living an honest life, volunteers handed out copies of The Way to Happiness, a nonreligious moral code written by author and humanitarian L. Ron Hubbard and based entirely upon common sense.

The theme of the evening was a precept from this booklet that undercuts crime: “Try to treat others as you would want them to treat you.”

The Church sponsors The Way to Happiness campaign to uplift neighborhoods in the Seattle community. The booklet provides a guideline to living a life based on self-respect and personal integrity—traditional values that go a long way to reducing crime.

The block party featured a live band, a unique 1924 Model T Ford truck where the barbecue was staged, a balloon artist and visits from city personnel and the Seattle Police Department.

And the highlight of the evening, at least for the under 12 crowd, was the arrival of a fire engine from Seattle’s Fire Department Station 8. Youngsters received badges from the firefighters and it wasn’t only the kids who clambered up onto the seats of the bright red fire truck.

To complement the message of The Way to Happiness, volunteers from another humanitarian campaign supported by the Church of Scientology were also on hand—the Seattle chapter of the Foundation for a Drug-Free World.

Drugs and crime are inextricably interrelated in today’s society. And the Drug-Free World materials present the unvarnished facts about commonly abused drugs in a youth-friendly format to help young people make the self-determined decision not to abuse drugs.

“As block watch captains for our area, we were happy to have the opportunity to throw a party for the neighborhood and meet some of the local residents,” said Ann Pearce, public affairs director of the Church. “It was great to have those conversations about making the community safer for everyone.”

The Church of Scientology and its members proudly share the tools for happier living contained inThe Way to Happiness. Over 4 million copies have been distributed in the last year alone.

For more information about The Way to Happiness visit: www.thewaytohappiness.org.