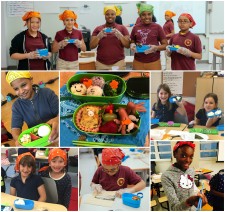 New York, NY, June 14, 2017 (Newswire.com) - TABLE FOR TWO USA, a 501(c)(3) non-profit organization, devoted to promoting healthy eating for children both in the United States and around the world, has launched the inaugural pilot program of its new initiative, Wa-Shokuiku: Learn. Cook. Eat Japanese! This project aims to teach elementary and middle school students in the U.S. about Japanese food and foodways through hands-on cooking and learning activities. Introducing pilot programs in Boston, New York, and Washington D.C. throughout spring, Wa-Shokuiku is expected to begin officially in autumn 2017.

Wa-Shokuiku combines the Japanese words “Washoku(和食)” which refers to Japanese food and, “Shokuiku(食育),” food education. Washoku, literally harmony in food, is recognized as one of the world’s healthiest diets. Shokuiku, a government-mandated school curriculum in Japan, promotes a wide range of knowledge about food as well as the ability to make appropriate food choices. The Wa-Shokuiku program is inspired and informed by the educational philosophy, flavors and food of Japan.

"The Wa-Shokuiku Project allows our students to experience not only a new cuisine but a new culture. The lessons are organized, interesting, and balance new learning with hands-on cooking."

Kirsten Svenson, Teacher at Community Health Academy of the Heights

The Wa-Shokuiku project is aimed at after-school programs as an enrichment activity and centers on three main focuses: (1) preparing delicious and healthy Japanese food, (2) understanding the “washoku” world, and (3) making a difference in the world through understanding food-related concerns regarding issues such as food waste, food insecurity, and unwholesome eating. Students will learn how to make iconic Japanese foods such as onigiri (rice ball), sushi rolls, miso soup, and okonomiyaki and be introduced to less well-known foods in the Japanese diet such as wakame seaweed and lotus root. Dietary concepts such as choosing foods with “5 colors” (red, black, yellow, white and green) help students identify foods with a variety of nutrients and flavors that aid in creating a balanced meal. In addition, students will learn how to put together a bento box lunch, chopstick etiquette, the importance of eating together as a group, appreciation for those who both prepare and grow our food with the words "Itadakimasu" and "Gochisosama", the importance of presentation and the concept of “Mottainai” (avoiding waste) as part of this 7-week program.

“The key is to make Japanese food approachable,” says curriculum designer and cookbook author Debra Samuels. “We’re teaching our students about the healthy habits and cooking styles that can be used across a wide range of ingredients.” Students aren’t just learning about how to make Japanese dishes; they are learning about so much more. Program Coordinator Alexis Agliano Sanborn adds, “It’s about a mindfulness towards cooking and lifestyle.”

The project launched its first pilot program at New York City school Community Health Academy of the Heights (CHAH) in Washington Heights under the supervision of Kirsten Svenson. After the first session, Svenson said: “The Wa-Shokuiku Project allows our students to experience not only a new cuisine but a new culture. The lessons are organized, interesting, and balance new learning with hands-on cooking. It is clear that Joshua-sensei (teacher) and the entire team of organizers and volunteers truly care about the culture that they are sharing and the students with whom they are sharing it. The enthusiasm in the room is palpable as our students practice new Japanese words, sample seaweed, rice ball, and arrange their bento boxes. Even as students left the very first session, they kept asking when Wa-Shokuiku would be back.” Students from CHAH had this to say about the program: “I like the new flavors in the Japanese recipes we make. At first, they seem different, but they taste really good!" “I like the program because we get to learn about a new culture that we wouldn’t know about otherwise.”

Wa-Shokuiku was born from the shared passion for Japanese food and food education of the project members. “We saw a need for this type of work in schools,” says Project Leader and TABLE FOR TWO USA Co-President Mayumi Uejima-Carr. Uejima-Carr has been holding workshops in American schools and noticed the need for a new approach to food and programming. “Rather than one-off cultural events, we really wanted to create a structured curriculum to make as meaningful an impact on students as possible.” Boston University Anthropology Professor Merry White, a Japanese food and education expert, is a consultant on the project and Yamagata University Professor Katsura Omori, an expert in Japanese food education, has provided continued support and guidance. “Pleasure and curiosity are at the core of Japan’s food learning: children are taught to develop their senses and their sensibilities through education in food,” says White.

The Wa-Shokuiku program has been made possible thanks to a grant from the United States-Japan Foundation as well as several charitable foundations, Japanese food corporations and pro bono support. David Janes, Director of Foundation Grants and Assistant to the President at the United States-Japan Foundation, says: “Wa-shokuiku not only promotes healthy eating, but promotes greater interest in the ties between the U.S. and Japan.” SMBC Global Foundation, CHALK (Choosing Healthy & Active Lifestyles for Kids) Program of New York-Presbyterian, JFC International/Nishiki, Zojirushi America, City Year Boston, Kid Power and Polite Piggy’s also provided necessary support and supplies for the pilot program. The Wa-Shokuiku team is excited to launch the pilot program and has set their sights on providing Wa-Shokuiku to more students in more schools this Fall. “Our initial experiences in the classrooms have been overwhelmingly positive,” says Uejima-Carr. “We continue to seek support and instructors that will help us bring this experience to more students.”

About TABLE FOR TWO USA:
TABLE FOR TWO USA (TFT) is a 501(C)(3) organization that addresses issues of hunger and obesity through a unique “meal-sharing” program. TFT partners with corporations, restaurants, schools and other food establishments to serve healthy, low-calorie, TFT-branded meals. For each one of these healthy meals served, a small portion of the cost is donated to provide one school meal for a child in need. TFT started in Japan and now operates in 14 countries. As one of the most well-known NPOs in Japan which is noted for the longevity of its people, TFT promotes Japanese healthy eating culture as well to tackle the critical health issues.

About TABLE FOR TWO USA

TABLE FOR TWO USA is a 501(C)(3) organization that addresses the joint issues of hunger and obesity through a unique meal sharing program and food education program called "Wa-Shokuiku -Learn. Cook. Eat Japanese!-". 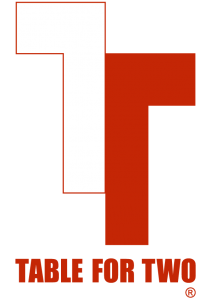