Known as equine-assisted therapy, or simply equine therapy, horses have been employed for therapeutic purposes since ancient Greek times. 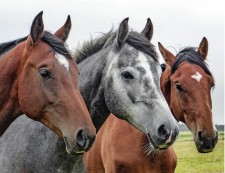 More recently, Belgarde goes on to explain that modern documentation on the topic begins in Europe in 1946. "Advances in equine therapy documented in Europe in the 1940s were the precursor to the practices we see and use today," she adds.

This European documentation pertains primarily to the use of horses in Scandinavia, used to help those who were suffering from post-polio syndrome.

Today, however, the practice is most commonly used to treat conditions such as anxiety, autism, genetic syndromes, and traumatic brain injuries. Whether in a physical, mental, or emotional context, equine-assisted therapy has also been witnessed to improve issues with self-esteem, self-control, self-awareness, empowerment, interpersonal relationships, relaxation, and general happiness, as well as concentration and focus.

According to Belgarde, it's an entirely efficient and effective form of treatment. "It's drug-free, too," she adds, "which is one of the biggest benefits in my opinion."

Hippotherapy, as the practice is officially known, arrived in the U.S. from Europe in the 1960s and has now spread to over 40 countries globally.

Designed and touted to help improve communication skills, establish an understanding of deeper trust, and to reinforce the importance of clearly defined goals, it may be undertaken in a professional or personal capacity.

Performed as a group, team, or on an individual basis, the practice is used predominantly by businesses looking to develop leadership skills within their organizations, or by high ranking executives wishing to improve themselves personally. "It's a rapidly growing market," points out Belgarde.

"Both equine-assisted therapy and equine-assisted coaching are wonderful processes," she adds, wrapping up, "and I would urge anyone interested in finding out more to pursue the options available to them locally."