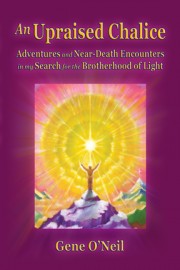 Brattleboro, VT, December 2, 2015 (Newswire.com) - ​​​In late October 2015, in a remarkable chain of events, a mundane everyday occurrence turns into a mystical encounter when a washing machine repairman completes a service call - and is given a controversial new book (An Upraised Chalice) about multiple near-death encounters, Archangel Michael and a lifelong spiritual quest.  Several days later the repairman opens the book and recognizes the picture and newspaper account where the repairman is mentioned as a witness to this fatal car accident 30 years ago – almost to the day.

According to J. Mahon of ASEMC Press, “the fact that this extraordinary co-incidence occurred, in and of itself, is startling, but when combined with the very subject and mystical nature of the book, this newest event takes on a different order of magnitude.  The repairman's receiving the book and his direct connection to the author’s first major near death experience is an example of the mystical powers at play that the book directly speaks to.”  The book, “An Upraised Chalice – Adventures and Near-Death Encounters in My Search for the Brotherhood of Light” has received many dozens of 5 Star reviews, and details a lifetime quest in search of the meaning of life.

Several days later we picked up a voice message on our answering machine - a man who identified himself as the washing machine repairman briefly relayed: "…. I picked up the book that Joanne gave me and opened it to the page where the picture of the terrible accident is… I don't know how to say this, or what it means, but I was there! I was driving the truck immediately in back of the car that crossed the lane and hit Gene's car head-on." So almost 30 years to the day and 50 miles away from where the accident occurred on one of the busiest highways in Massachusetts, an eye witness ...

Available in Barnes & Noble and bookstores everywhere via New Leaf Distributing and DeVorss and Co, ‘An Upraised Chalice” addresses the global paradigm shift away from external organized religions towards personal spiritual odysseys. The 5-Star ForeWord Review of ‘An Upraised Chalice’ states “Nothing gets one’s attention like one’s imminent demise - the book chronicles the remarkable travels, adventures and near-death experiences that have marked the authors quest to discover the meaning of life. The practical insights detailed here, born of experience, cut across religious boundaries to convey a vibrant spirituality in plain, accessible language.”

“An Upraised Chalice is a spiritual adventure story detailing multiple near-death experiences; it is the inspiring story of a lifetime's quest for the sacred, ancient wisdom, alluded to by the mystical traditions of the world's cultures.  The book is predicated upon the concepts of karma and reincarnation and details the authors coming to terms with this inner understanding of a past life that he had as a boy and sought to understand more fully as he grew older. The book introduces the concept and the teachings of a “sacred Brotherhood,” an ancient organization composed of the great illumined saints, masters and sages of east and west, some of which were the principals of the world’s major religions.”

An Upraised Chalice – Adventures and Near-Death Encounters in My Search for the Brotherhood of Light’ – (ISBN 13: 978-0-9912635-2-3  ) is now available in print and eBook around the world from Amazon and in the US by Barnes & Noble and bookstores everywhere via New Leaf Distributing and DeVorss and Company. The eBook is available via Amazon and Apple iTunes.