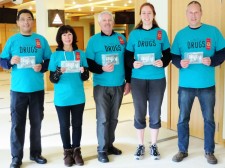 Seattle, Washington, November 9, 2016 (Newswire.com) - In celebration of its 10th anniversary, the Seattle chapter of the Foundation for a Drug-Free World kicked off a month-long series of drug-education events at the annual conference of the Washington Traffic Safety Education Association (WTSEA) in Wenatchee, Washington.

WTSEA Coordinating Secretary Gerald Apple thanked the Foundation for a Drug-Free World for their sponsorship of the conference and for providing nearly 5,500 copies of Truth About Drugs materials to educators attending the program.

In partnership with the Church of Scientology in Seattle which supports their activities, the Foundation held an open house and forum featuring Terrie Johnston, Crime Prevention Coordinator with the Seattle Police Department as the keynote speaker. Ms. Johnston spoke about the spike in heroin use in the greater Seattle area. She spoke of her decades-long partnership with the Church on crime prevention activities and the value of the Foundation’s drug prevention work in the community.

Drug-Free World volunteers capped their month-long drug education drive with Red Ribbon Week activities. Red Ribbon Week commemorates the life and courage of DEA Agent Enrique Camarena who was brutally murdered while on assignment investigating Mexican drug cartels. The volunteers fanned out across downtown Seattle, handing out hundreds of red ribbons and copies of The Truth About Drugs booklets that present the unvarnished truth about the most commonly abused drugs in a youth-friendly format.

The Church of Scientology and Scientologists support the Foundation for a Drug-Free World. They are dedicated to eradicating drug abuse through education. Author, humanitarian and Scientology Founder L. Ron Hubbard stated “Research has demonstrated that the single most destructive element present in our current culture is drugs.”

Source: Seattle Chapter of the Foundation for a Drug-Free World