Sunland Scientologists Team Up to Get Out the Truth About Drugs

Launching the summer with the truth about drugs 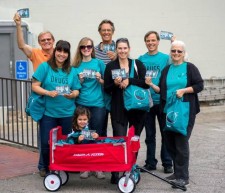 "There is so much misinformation out there about drugs — much of what is bandied about is actually misinformation from drug dealers," said the leader of the Drug-Free World Foothills Chapter. "We want to offer facts to kids and their families. People should understand everything they can, so they can make informed choices."

They launched their campaign by delivering 2,000 Truth About Drugs booklets covering marijuana, prescription drugs, and alcohol to some 500 homes in the Sunland area.

The nonprofit Foundation for a Drug-Free World is a public benefit corporation. It offers these booklets at no charge as well as Truth About Drugs education kits and training for anyone wishing to implement drug education lectures and seminars. The award-winning public service announcements and Truth About Drugs — Real People, Real Stories documentary film are also available on DVD for replay in schools, drug awareness information booths or large drug education assemblies and events. These PSAs have also aired on local network and cable stations, movie theaters, malls, sports arenas, train stations and airport terminals.

The Church of Scientology and its members support the Foundation for a Drug-Free World whose Truth About Drugs campaign is one of the world's largest nongovernmental drug education and prevention initiatives. Thanks to this support, the Foundation provides — free of charge — drug education booklets, videos and educator guides to teachers, mentors and civic and community leaders.