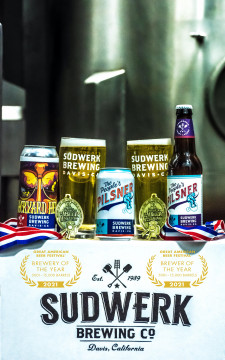 DAVIS, Calif., September 30, 2021 (Newswire.com) - Sudwerk Brewing Co., a third-generation Davis, California, craft brewing company rooted in German tradition, announced recently that it was named the winner of Top U.S. Brewery and Brewer of the Year at the 2021 Great American Beer Festival (GABF), the most competitive beer competition in the nation.

"Since 1989, lagers have been at the core of who we are as a brewery. As a pioneer of craft lagers, this is our passion and it's an honor to be recognized for that," said Ryan Fry, co-owner of Sudwerk Brewing Co. "We are so grateful and proud of Tom Stull (Head Brewer) and our team. It takes a great team to make great lagers and we have one of the best."

GABF gold medal criteria calls for "a world-class beer that accurately exemplifies the specified style, displaying the proper balance of taste, aroma and appearance." The Professional Judge Panel awards gold, silver and bronze medals that are recognized around the world as symbols of brewing excellence. These awards are among the most highly regarded in the industry and heralded by the winning brewers in their national advertising. To be eligible for the Brewery of the Year award, a brewery must enter two or more beers and verify its 2020 production information.

"Despite being forced to cancel the festival portion of GABF, our brewing community rallied together to make this year's GABF competition one for the books — our largest competition judged to date," said Chris Swersey, competition director, Great American Beer Festival. "Judges continue to be impressed with the quality and innovation of all entries they evaluated. The Brewers Association is proud to honor this year's deserving winners. We look forward to celebrating in person together next year."

In addition to being named Brewery & Brewer of the Year, Sudwerk Brewing Co. was also awarded two gold medals for The People's Pilsner and the Backyard Hero American Lager. "It's especially gratifying to be recognized for being the best in those lager categories," Fry said. "Lagers are easy drinking but one of the most challenging styles to brew. We have been dedicated to continuously pushing the boundaries of lagers in new, innovative ways and are proud to be recognized for a style that fellow brewers judge themselves upon. Lagers are what we love, what we drink, and what we do."

Sudwerk Brewing Co. was founded in 1989 as Davis' first and only brewery by two German descendants, Dean Unger and Ron Broward, and has specialized in craft lagers for 32 years. In keeping up with tradition, Unger's grandson Trent Yackzan and childhood friend Ryan Fry have been determined to share the high-quality taste of craft lagers as a third-generation family-owned and independently operated company, methodically refreshing the iconic Sudwerk brand over the past decade. "Sudwerk" directly translates to "southern factory" but they've better embraced its German slang meaning for "community brewery" as part of its core company ethos. Sudwerk is dedicated to building its community and giving back and is proud of its deep ties with the world-renowned UC Davis fermentation science and brewing programs. Sudwerk is currently in the midst of planning a Spring 2022 opening of its destination brewery experience located in Davis, California.