Street Art Campaign 'Protector Monuments Reclaim the Pedestal' Launches in NYC, Reigniting the Question of Who Should Be on Monuments 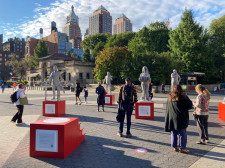 NEW YORK, September 30, 2021 (Newswire.com) - Thousands of New Yorkers are being drawn to the five life-size monuments that were erected today in the Northwest corner of Union Square for the launch of the "Protector Monuments Reclaim the Pedestal" street art campaign. I Am Your Protector, the non-profit behind the campaign, not only wants to highlight the stories of protectors - or real-life heroes who have crossed perceived lines of divide to speak up or stand out against injustices globally - but also wants to provoke the question of who should be placed on public monuments and celebrated.

Among the five monuments are a New Yorker who saved a man who fell on the train tracks, an undocumented immigrant who risked deportation to save a 6-year-old from being kidnapped, and a Syrian refugee who saved a man from drowning in a freezing canal in the Netherlands.

Quotes from the public:

"It's incredible. I remember this gentleman (Wesley). I read his story in the news. This is amazing work!"

"I'm a teacher, and we just started a course on social justice. This campaign is meaningful and essential."

"These stories are really compelling and inspiring. I'm going to talk to my kids - one of them might be a protector"

I Am Your Protector is a non-profit organization + community of people who speak up and stand up for each other especially across lines of perceived divide to change the way people perceive the "other". IAYP, which shares educational tools to inspire and instruct ways to rise as each other's protectors, has reached over 4 million people and was invited to join President Obama at the Obama summit as Civic Leaders for the impact of its work in deconstructing hate.

Joe Reginella, dubbed "Banksy of Monuments", is an artist and sculptor from Staten Island who's known for his renegade art projects and social experiments.

Dani Laurence was born a political refugee from Hungary in Switzerland, lived in the Middle East and Paris and is the founder and Co-Director of I Am Your Protector.

• The protectors whose stories are reflected on the monuments

• Aziz Abu Sarah, Co-Director of I Am Your Protector (at event)

Source: I Am Your Protector 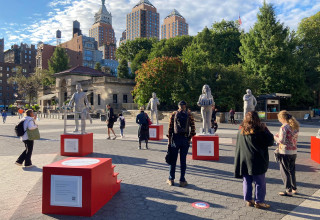 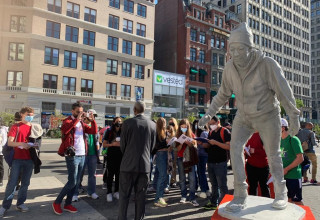 'Protector Monuments Reclaim the Pedestal': a Public Art Campaign Explores the Intersection of Storytelling, Art & Activism
As the conversations and activism around monuments grow louder, I Am Your Protector is asking people to reimagine what monuments should depict, emulate, and be celebrated with five life-sized monuments of refugees, immigrants, and minorities from around the world. Launching in NYC, but traveling to cities nationally, these monuments - created by Staten Island Joe Reginella (coined the 'Banksy of Monuments' in the New York Times )- are meant to spark the public to share protector stories from their own communities.
I am Your Protector - Sep 29, 2021
Newswire