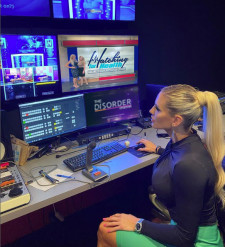 This new mini-series from Ms. Warner and Solve M.E. highlights the challenges surrounding these largely invisible, post-infection diseases that affect a rapidly growing population. Before contracting long Covid, two of those featured in the series already had rare diseases: Ehlers-Danlos Syndrome and complex regional pain syndrome. Episodes of this series will debut exclusively on The Disorder Channel beginning May 5.

This debut marks the third such partnership between Ms. Warner and The Disorder Channel since the channel already hosts her other works: "Unfixed," a 20-episode documentary series about people in various stages of living with chronic conditions and disability, and "Life Rebalanced Chronicles," which features six installments about vestibular disorders.

Meanwhile, The Disorder Channel has also recently added to its lineup "Hatching for Health," a couch-chat-style talk show hosted by Jessica Hatch. Over dozens of episodes, Jessica interviews patients, caregivers, and doctors who deal with rare diseases. Jessica has faced a rare disease of her own, so her connection to these guests is deep and genuine. "I am thrilled to have my show join The Disorder Channel with many other fabulous shows and films all about the rare disease community," says Hatch.

The Disorder Channel continues to add new installments to these current series, both created by rare disease patients:  "Joey Sooch is Turning to Stone" on Fibrodysplasia ossificans progressiva (FOP), and "The World of Rare Disease" with host Lisa Deck.

In addition, the Disorder Channel remains the exclusive place to watch episodes of the original series "Once Upon a Gene TV," based on the award-winning audio podcast hosted by Effie Parks. It has added new episodes each month for the past year addressing concerns of rare families including depression, palliative care, and the (previously non-existent) Rare Caregivers Guidebook.

The Disorder Channel is the only streaming channel devoted to programming about rare diseases. Founded by two rare-disease dads, it features over 100 film and video titles, exclusively about rare diseases and other disabilities. It is available to download and watch for free on Roku and Fire TV devices. The Disorder Channel is supported in part by Alnylam, Horizon, and Takeda. http://thedisorderchannel.com

About Foundation for USP7 Related Diseases