Record-breaking storms and policy shake-up are only two of the factors influencing the future of the transmission and distribution markets.

ATLANTA, Ga., October 16, 2017 (Newswire.com) - The energy industry is in widespread evolution, prompting utilities and investors alike to seek more innovative, efficient, and sustainable means of enhancing the reliability and resiliency of the North American electric grid. Policy upheaval and storm recovery efforts have only further clouded the horizon when it comes to predicting the future of grid infrastructure and where industry leaders are casting their dollars for future capital expenditures. The latest market forecasts from Atlanta-based C Three Group shed light on what to expect in the coming years for transmission and distribution trends. Last year, over 300 electric utilities, vendors, investors, bankers and regulators received copies of the forecast.

C Three's research, rooted in empirically-based data, dives into regional overviews, market drivers, holding company/utility rankings by key segment, and more. For example, the top 10 utilities in total electric distribution spend from 2008 through 2016 account for over $67 billion and 39 percent of the total spend in equipment, materials, and services. Meanwhile, in the electric transmission market, the top 20 investor-owned utilities accounted for 54 percent of 2016 total spend in transmission capital expenditures.

"Electric transmission and distribution spend is likely to top $100 billion in 2017 when all the storm damage is factored in," predicts C Three's President, Jean Rollins. "Additionally, there are growing signs that distribution and transmission spend could be driven higher than the current forecasts in order to accommodate and facilitate the two-way flow of power that micro-grids and distributed generation require. Both SDG&E and Southern California Edison have recently filed rate increases in which a substantial part of their requests center on enabling two-way flow of power."

The C Three Group, LLC™ is based in Atlanta and was founded in 1998 to provide empirically based market due diligence and forecasts to vendors and investors in the energy infrastructure industry. For more information or to obtain C Three's complete forecast, contact Jessica@cthree.net. 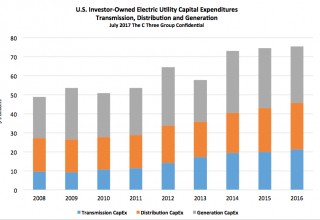 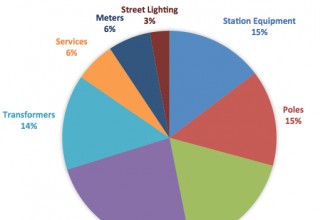