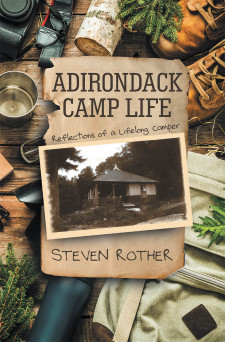 SOUTH ORANGE, N.J., February 26, 2021 (Newswire.com) - Steven Rother, an excellent writer, has completed his most recent book "Adirondack Camp Life": a gripping and potent reflection of a camper who spent his early years in the Adirondacks, where his father purchased a camp and where early life experiences formed his identity and lifelong goals.

Steven writes, "This book is a series of real-life short stories of the author's life experiences in the high peaks region of the New York state Adirondacks. Although Steve Rother is, and has been a practicing attorney in New Jersey, he has had deep roots in the Adirondacks from early childhood through his 80th year of life. Those experiences began in 1948, long before the Adirondacks became easily accessible by interstate highways. The experiences became lifelong when his immigrant father, who earlier traveled from New York City to the high peaks by hitchhiking, purchased a camp. These short stories relate how his experiences in the Adirondacks, under the influence of his parents and Adirondack natives, have influenced his identity."

Published by Fulton Books, Steven Rother's interesting and stirring account traces the life of a camper in the Adirondack high peaks wherein he gained a ton of fruitful experiences he carried throughout his life and helped shaped the man he is today.

Witness in here how he turned out and become triumphant in his visions.

Readers who wish to experience this brilliant work can purchase "Adirondack Camp Life" at bookstores everywhere, or online at the Apple iTunes store, Amazon, Google Play or Barnes & Noble.

Nancy Kennedy Lawrence's New Book 'A Lifetime or Two' is a Well-Written Tale That Unravels the Life, Lineage, and Bonds That Strengthen One Irish Family
Fulton Books - Mar 26, 2021

Bill Crossman's New Book '18 Windows to the Center of the Universe' is a Medley of Vivid Stories That Paints a Portrait of Peculiar Souls in Seattle's Fremont District
Fulton Books - Mar 26, 2021
Newswire