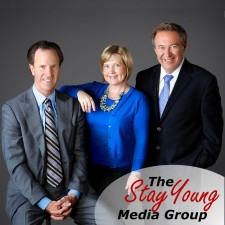 Dallas, TX, February 23, 2017 (Newswire.com) - The Staying Young Show has grown exponentially over the past year, picking up over fifty stations across the United States and growing by the day. With the popularity of the show on terrestrial stations, the Stay Young Media Group, LLC, the owning entity of the Staying Young Show, decided to relaunch the show in June 2015 as the podcast Staying Young Show 2.o so that it could be heard internationally. Shortly after launching the podcast, they hit #1 on iTunes N&N Science and Medicine. This week marks the one millionth download of the podcast.

The Stay Young Media Group engaged Talk Media Network as their syndicator a little over a year ago. Josh Leng, owner of Talk Media Network, had this to say, "The Staying Young Radio Show continues to lead the way with impactful broadcast and on-demand listening for those who take an active role in their medical and healthy living decisions. The Staying Young listener is one who cares highly about their well-being and their loved ones. It is a fun and informative program, with numerous takeaways in each and every weekly episode."

The show airs weekly and is available to stations through the SRN satellite feed or through the FTP site.  Stations can also provide their listeners with daily Stay Young Medical Minutes during drive times. The podcast version also allows stations to keep the RSS feed of past shows on their websites in the event listeners miss the episode or want to share the show with friends and family. This not only drives listeners to their station, but also to the station's website.

With no topic off limits, and leading scientist and celebrities as guests, the show is able to attract a significant amount of attention.  "We have seen a tremendous response from social media. When people see a show listed that pertains to them or a loved one, they want to share it. This is why some shows tend to go viral," states show host Judy Gaman.

The Staying Young Show has been recording in the Salem Radio Network studios for almost six years. Jim Barto,  Director of Satellite Operations and the show's producer at Salem explains their success, “There are other health and wellness shows out there, but none quite as entertaining and as informative as this one. It’s not surprising that it has taken off like it has.”

The show gets its entertainment factor partially from the format, which includes entertaining and interactive segments such as "Doc Shock", "The Immortal Minute", "Medical Mania Trivia", and "Dementia Defender". These segments are found in every show with a yearly Dementia Defender Showdown among the top listener contestants. "Some of our listeners take it very serious. One year we had a female in the north and a male in the south competing for the showdown. Trust me, it was war," says Dr. Mark Anderson.

For information about syndication of the Staying Young Show on your station, contact: Josh Leng, Talk Media Network, 616-884-8616 or joshleng@talkmedianetwork.com

Stay Young Media Group, LLC is owned and operated by Drs. Walter Gaman and Mark Anderson, along with health and wellness expert Judy Gaman. Their mission is to provide people with as much health information as possible through radio and publications.