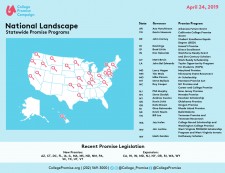 WASHINGTON, April 24, 2019 (Newswire.com) - The College Promise Campaign, a nonprofit working to increase the number of quality College Promise programs, released a statewide program landscape during the Michigan College Promise Symposium at the Detroit Regional Chamber. In the fall of 2018, the campaign announced over 300 active College Promise programs across 44 states. Today, they released a status update on statewide programs engaged in the free college movement. The release highlights 24 states that have actively passed and taken steps to implement a statewide “Promise” program. These statewide programs reflect the bipartisan nature of a movement intended to both bolster the American talent pipeline and increase student success outcomes. “All across the nation, momentum has been building throughout states and localities to create opportunities which allow students to start and complete a college education without taking on mountains of student debt,” said Martha Kanter, Executive Director of the College Promise Campaign.

Today, the program highlights the gains made by governors in establishing statewide programs across the country. Over 60% of states currently have or are taking legislative steps to implement a statewide College Promise program.

"All across the nation, momentum has been building throughout states and localities to create opportunities which allow students to start and complete a college education without taking on mountains of student debt."

Some College Promise programs use a hybrid mixture of local, state and federal funds; others use only local and/or state dollars; and still, others are solely privately funded. A variety of programs rely on public and private partnerships with help from corporations and philanthropy. Some are designed for a single campus or college district, while others are city-, county- or state-wide.

“Initial results show local and state Promise programs improve outcomes for students and their communities,” said Robyn Hiestand, Director of Research and Policy at the College Promise Campaign. “We are going to be working with local and state researchers and practitioners to improve research, analysis and policy tools to help inform the national dialogue on free college.”

The Promise movement has seen significant growth over the past several years, growing from 54 programs in 2015 to over 300 nationwide, with growth scaling to the state level. Research shows that Promise programs promote a college-going culture and help students not only access but succeed in college. While individual program models vary, each is guided by a few core principles. A College Promise is a commitment to fund a college education for every eligible student advancing on the path to earn a degree, certificate and/or credits that transfer to a four-year university. It’s a promise to prepare students for the 21st-century workforce and the pursuit of the American Dream without the burden of unmanageable college debt. It's a promise to make the first two years of college - at a minimum - as universal, free, and accessible as public high school has been since the 20th century.

Donate to the College Promise Campaign

The College Promise Campaign is a nonpartisan, nonprofit higher education initiative that builds widespread support for funding quality college programs for all hardworking students. In the 21st century, a high school diploma is no longer enough to lead Americans to a good job and a decent quality of life. CPC is an initiative of Civic Nation, a 501(c)(3) organized exclusively for charitable and educational purposes.

The College Promise Campaign empowers community colleges and their education, business, government and philanthropy partners to enact solutions for students to graduate from college, and build rewarding lives in our nation's communities and states. 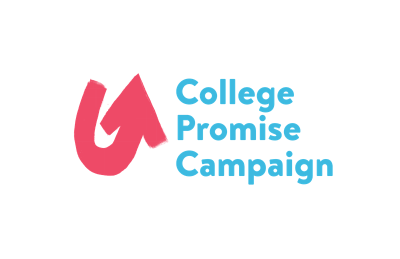