Star Trek™ Vulcan Ale? Make It So, Number One. 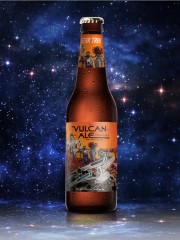 New York, NY, September 3, 2015 (Newswire.com) - ​​​​​​​​Federation of Beer announces that Shmaltz Brewing Company of Clifton Park, NY is brewing a new Star Trek-themed beer called Vulcan Ale – The Genesis Effect, that will be made available on Planet Earth in early October. Under license by CBS Consumer Products, Vulcan Ale – The Genesis Effect will pay homage to the Star Trek franchise and its legacy, tying into the storyline of The Wrath of Khan as well as Shmaltz’s own brand of He’brew craft beers.

Developed by Shmaltz Lead Brewer, Richie Saunders, Vulcan Ale – Genesis Effect is a Red Session IPA. It uses a blend of hops meant to invoke a sense of intergalactic wonder and adventure – Galaxy, Warrior and Comet, to name a few. Jeremy Cowan of Shmaltz Brewing says there are plans to make the beer available at the brewery as well as from the “Hills of Hollywood, to the Shores of Lake Michigan.”

Nick and Terry sat down with Clinton and Vern with Federation of Beer. Together, they announced their newest beer: The Genesis Effect! They talk about the new beer, where it's inspiration came from, and more. Check out this short and fun interview. Clinton shares his favourite scene from his favourite movie: The Wrath of Kahn, where the Genesis Effect is seen tingling across the surface of the planet — like a good beer. They are working with Schmaltz Brewing Company to produce a Red IPA beer in time for New York Comic Con. They are excited to release the new beer, and are looking release it in New York, Chicago, Seattle, and other watering holes as far north as Canada and as far south as Florida. Last year they launched Klingon Warnog, which was featured on Saturday Night Live and Conan O'Brien. Nick suggests that their next beer should be light and airy, and should be named Stratos after the Cloud City. Vern says it's a possibility, and they are planning to produce a non-alcoholic beer in time for STLV 2016.


The release of the latest Star Trek beer comes just in time for events like New York Comic Con. “We are thrilled to be part of this project, bringing our love for Star Trek and craft beer to the next generation of beer geeks and Star Trek fans alike” says Federation of Beer’s Vern Raincock.

About Federation of Beer: The Federation's Prime Directive: to produce high quality Craft Beer designed to unite both Star Trek and Craft Beer fans. The Federation has attracted worldwide interest and is exploring inter-galactic “Colla-Brew-ation Hopportunities” in the Alpha Quadrant.

In early 2015, Star Trek Sindicate Lager – The Orion Seductress was released in Seattle in time for Emerald City Comic Con and Calgary Expo, creating a trifecta of hand crafted brews available on planet earth, along with Klingon Warnog Roggen Dunkel and the first episode of Vulcan Ale. The second episode of Vulcan Ale – The Genesis Effect will please hop heads and trekkers alike.

The Federation Of Beer began its Five Year Mission in the small town of Vulcan, Alta.,Canada, pop. 1,836 (the official Star Trek capital of Canada). The townspeople hold an annual Star Trek convention — VUL-CON — celebrating the fact the character (played by actor Leonard Nimoy) was born on the far off planet of Vulcan (god of fire on Roman myth). During Spock Days in 2012,
Dr.Richard Weger ran into Calgarians Paul Carreau, a retired Canadian military veteran, and Vern Raincock, a beer distributor for Delancey Direct Incorporated (importer of craft beer into Western Canada). All three were drinking beer, talking about Star Trek (being avid geeks of the franchise) and thought the TV program deserved a good ale. Their Season One Episode One beer "Vulcan Ale" was first released in Canada.

About Shmaltz Brewing Company : Ranked in 2013 as one of the "Top 100 Brewers in the World" by RateBeer.com, Shmaltz won 9 Gold and 5 Silver Medals in the World Beer Championships in 2012. A recipient of the "Distinguished Business Award" by the Brooklyn Chamber of Commerce, Shmaltz was also included in the "Top 50 Fastest Growing Bay Area
Companies" by San Francisco Business Times.

Founder and owner Jeremy Cowan established the company in San Francisco in 1996 with the first 100 cases of He'brew Beer® hand bottled and delivered throughout the Bay Area in his Grandmother's Volvo. He'brew® now sells across 37 states, through 40 wholesalers and nearly 5,000 retailers. In 2007, Shmaltz released a new line of craft brewed lagers under the Coney Island® banner. The Coney Island brand was recently acquired by Alchemy and Science, a craft beer incubator, owned by Boston Beer (Sam Adams).

About Federation of Beer

The Federation's Prime Directive: to produce high quality Craft Beer and to unite both Star Trek and Craft Beer fans.