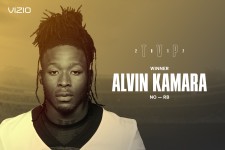 Irvine, CA, January 23, 2018 (Newswire.com) - VIZIO, Inc. today announced New Orleans’ Alvin Kamara as the winner of the 2017 VIZIO Top Value Performer (TVP) award. Kamara, along with the rest of this season’s candidates, spent the last two weeks campaigning by engaging his followers on social media and participating in interviews with a variety of national sports radio shows, where he directed fans to show their support by voting. In this year’s contest, Kamara beat out a very competitive crop of candidates including Green Bay’s Davante Adams, Baltimore’s Alex Collins, Chicago’s Jordan Howard and Minnesota’s Jerick McKinnon. ​

Just like VIZIO offers consumers significant value with its smart TVs and audio products, Kamara brought similar value to the New Orleans franchise this season. In his rookie debut, Kamara emerged as one of the league’s top dual threat players. His sensational speed and ability in the passing game quickly made Kamara an integral part of one of the league’s top offenses. With multiple games over 100 total yards on his resume, Kamara accounted for more than 1,500 total yards this season. The rookie third round pick with a base salary of $465,000 was a very compelling TVP candidate for voters, having played a significant role in energizing a resurgent New Orleans team.

“I put in a lot of hard work this season, and it is humbling to have the fans recognize my efforts on the field by selecting me as this year’s VIZIO Top Value Performer,” said Kamara. “I had the chance to compete against the other nominees every Sunday, and just knowing the amazing seasons each of them had makes it even more of an honor to be selected as the winner amongst such a great group of players.”

With the expertise of former general manager, current football analyst and commentator Charley Casserly, as well as insight from Hall of Fame Running Back Terrell Davis, VIZIO determined this year’s candidates based on regular season performances, statistics and the role they played in the success of their respective teams. These factors were weighed against the players’ base salaries to determine the nominees who represented the greatest overall value during the 2017 season.

“We want to congratulate each of this year’s candidates for their incredible seasons. Their efforts on the field helped make the eleventh installment of the Top Value Performer award one of the most exciting in recent memory,” said Jeila Foroozani, Director of Corporate Marketing, VIZIO. “Alvin did a great job engaging his fans and rallying for their support in his pursuit of this year’s TVP honors. We are very thrilled to name him our 2017 Top Value Performer and know he will continue to build on the success of his rookie season.”

Now in its eleventh year, the VIZIO Top Value Performer award is presented to the professional football player who’s on-field performance most exceeds the base salary of their current contract, as voted on by the fans. Much like each of the candidates represent a great value to their respective teams, VIZIO continues to offer consumers a tremendous value through its smart TV and audio collections as one of America’s leading consumer electronics brands.

The 2017 TVP finalists were voted on by fans at VIZIO.com/TVP from January 3 to January 16. Fans were also encouraged to spur discussion by using each player’s custom TVP hashtag on social media. With each vote, fans received the chance to enter a giveaway to win a VIZIO SmartCast™ M-Series™ 65” Class Ultra HD HDR Home Theater Display™ and a VIZIO SmartCast™ 45” 5.1 Sound Bar System.

VIZIO's mission is to deliver the ultimate entertainment experience through our community of connected consumers, advertisers, and media content providers. Through our connected entertainment platform, VIZIO is transforming the way consumers discover and experience media content. Since our founding in California in 2002, VIZIO has built an industry-leading brand and sold over 75 million products, including televisions, sound bars and other devices. VIZIO is a leading HDTV brand in America1 and is the #1 sound bar brand in America2. VIZIO product leadership is highlighted by a number of industry reviews and awards, making the 2017 collection the most awarded in company history. The 2017 VIZIO SmartCast E, M and P-Series Displays all received Reviewed.com’s Editor's Choice awards3 and were listed as the site's "Best of the Year." The 2017 VIZIO M-Series SmartCast Display received CNET's Editor's Choice with an 8.6 rating4. The M-Series also received the Editor's Choice from PCmag5. VIZIO's SB3851 was rated "The Best Budget Soundbar" by The Wirecutter6, a New York Times company, and VIZIO's SB3621n-E8 sound bar received a 9.1 score and an Editor's Choice from CNET7. For more information, please call 888-VIZIOCE or visit www.VIZIO.com.

© 2018 VIZIO, Inc. VIZIO, the V Logo, VIZIO SmartCast and other terms and phrases are trademarks or registered trademarks of VIZIO, Inc. All other trademarks and logos are property of their respective owners. All rights reserved. 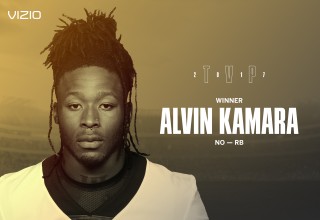 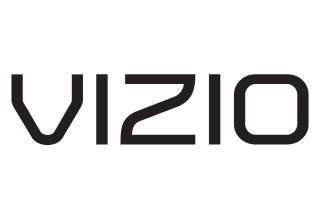 We are a full service Public Relations and Advertising boutique with over twenty years of experience and contacts in the consumer electronics and computer technology industry.