The Church of Scientology Harlem celebrated International Human Rights Day with a forum and open house to bring the community together in honor of the Universal Declaration of Human Rights. 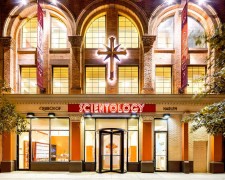 Harlem, New York, December 15, 2016 (Newswire.com) - Scientologists of Harlem, New York, joined Scientology Churches across the world in celebrating the 68th anniversary of the UN General Assembly’s adoption of the Universal Declaration of Human Rights (UDHR). The theme of the forum was “Stand up for someone's rights today!”—the 2016 International Human Rights Day motto.

Master of Ceremonies Ms. Sharon Garrett, the Church’s Community Coordinator, welcomed those attending and introduced them to Church-sponsored human rights education initiatives United for Human Rights and its organization for young people, Youth for Human Rights.

Rev. Susanna Bastarrica, founder of Vigil 4 Peace & Ecology,spoke of human rights as the basis of all social change.  She presented the Church with a certificate of appreciation for humanitarian and Scientology Founder L. Ron Hubbard, characterizing him as a friend to Mankind who has inspired a sustainable culture of peace.

Teen rapper Truth Speaker followed with a presentation of the 30 human rights of the UDHR.

Artist Peter Rogina described a project he undertook on behalf of the New York Peace Coalition—Peace Lights—a digital projection art creation produced with fellow artist Eileen Cohen. He spoke of the importance of awakening people to their rights, particularly those in the countries of the African Union (AU). Just last month, African Union Political Affairs Commissioner Dr. Aisha Abdullahi described the state of these rights in AU countries as not meeting international norms and standards, particularly concerning violence against women. On behalf of the New York Peace Coalition, Rogina presented a proclamation to Youth for Human Rights International for carrying out its mission to educate people and for the quality of its materials and effectiveness of the program.

Those attending the conference also heard presentations from human rights activists Noble I’M Manu-El:Bey, who advocates for the rights of the child, and Mary Pannell, who made it clear that human trafficking is not just an issue in developing nations, it happens “right here in our neighborhoods.”

The Church of Scientology and Community Center of Harlem opened July 31, 2016, and has since become a vibrant hub of community activity. Its conference rooms, auditorium and seminar spaces are available for like-minded civic and religious groups to bring the community together and improve the lives of the people of Harlem.

Human Rights are a basic element of the Scientology religion whose Creed, written in 1954 by Scientology Founder L. Ron Hubbard, begins: “We of the Church believe: That all men of whatever race, color or creed were created with equal rights.” And the Code of a Scientologist calls on all Scientologists “to support true humanitarian endeavors in the fields of human rights.”

Source: The Church of Scientology