Spreading the Way to Happiness to the People of Honduras

Retired army veteran Jason Martin recently visited La Ceiba, Honduras, where he distributed copies of The Way to Happiness to those in need. 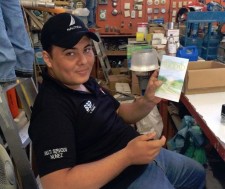 La Ceiba, Honduras, September 29, 2016 (Newswire.com) - Retired army veteran Jason Martin traveled from Nashville, Tennessee, to Honduras to complete construction of a house for missionaries, doctors and advisers. But as valuable as this project was, his trip soon turned into something even more meaningful.

The World Bank lists Honduras as one of the poorest, most vulnerable countries in the world, with 63 percent living in poverty. Unable to eke out a living, many resort to crime.

The Honduras murder rate rivals the worst on Earth, driven by street gangs who move U.S.-bound cocaine through the country from South America. In fact, less than 200 miles from La Ceiba, the city of San Pedro Sula was dubbed “murder capital of the world” in 2014 and is still among the worst cities on the list today.

“I decided I wanted to share The Way to Happiness with those living in poverty-stricken circumstances,” says Martin.

Familiar with the booklet from his studies at the Church of Scientology Nashville, he picked up copies as a way to help the La Ceiba community.

The Way to Happiness is a commonsense moral code, written in 1981 by humanitarian and Scientology Founder L. Ron Hubbard. As described on The Way to Happiness website, “This code of conduct can be followed by anyone, of any race, color or creed and works to restore the bonds that unite humankind.”

Its precepts include practical know-how on reducing crime and improving conditions in life.

Martin distributed the booklets, but ran into many who could not read. So he took things a step further by setting up a small group where precepts were read aloud. The group then discussed them, so all could achieve full understanding of what they contain.

In the three decades since the booklet was authored it has sparked a global movement, with 115 million copies of the booklet passed hand to hand in 186 nations.

For more information visit The Way to Happiness website.