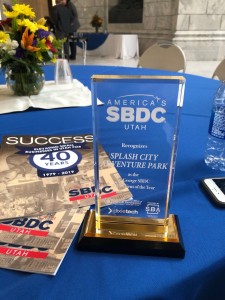 The ceremony was held at the Utah State Capitol in Salt Lake City with attendees including SBDC leadership, Utah Governor Gary Herbert, and businessmen and women from throughout the state. Each year, the Utah SBDC recognizes small businesses that are making a difference in their communities with the Client of the Year Award. Splash City will generate an estimated $7 million for the growing economy in St. George. The park is projected to attract over 350,000 visitors each year and will employ more than 350 individuals.

“We’ve got millions of people who come here in the summertime, and we wanted to provide more options for them to do,” said Mayoros. “It has been challenging to sell the vision and reality of this project to bring it to where it is today,” he said. “We could not have done it without the SBDC’s vision, feasibility studies, and financial direction.”

Community involvement and giving back to local charities has been at the heart of Splash City’s mission since the beginning. Splash City broke ground in 2019 with locally owned Watts Construction as the general contractor. Today, much progress has happened and Splash City is currently on track to open for the summer of 2021.

Once complete, Splash City Adventure Park will feature a 900-foot lazy river, splash pads for kids, a wave pool, and nine intertwined water slides, four of which have been featured on the Travel Channel. The park is being built on 16 acres of Middleton Drive, next to the St. George-Washington border. A new 26,000-square-foot family entertainment center will also be built next to the water park. “It has been a long road and now it will be a reality, thanks in large part to the SBDC,” Mayoros said.

America’s SBDC represents America’s nationwide network of Small Business Development Centers – the most comprehensive small business assistance network in the United States and its territories. SBDCs are hosted by leading universities, colleges, state economic development agencies, and private partners, and funded in part by the United States Congress through a partnership with the U.S. Small Business Administration.

Jim Mayoros is a passionate and innovative Southern Utah entrepreneur and businessman. Jim attended Dixie Technical College before earning his degree in Business Leadership at Ohio University. He has spear-headed several notable projects in the St. George area and can be described as an opportunist, innovator, and calculated risk-taker.