International Songstress Gives Out Doses of Happiness in New Podcast 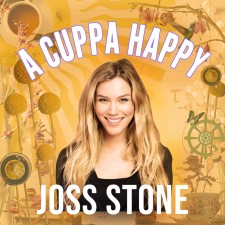 LOS ANGELES, July 30, 2020 (Newswire.com) - UK award-winning singer-songwriter, Joss Stone, is excited to announce today that she will be launching a brand new podcast titled: A Cuppa Happy on Monday, August 10.

A Cuppa Happy Podcast, produced in collaboration with UK podcast studio Fascinate Productions, showcases the true interpretation of happiness and how elusive and often unappreciated it can be until it’s gone. Joss Stone takes a deeper dive into what it is and how to find happiness. Each week, she gives a dose of happiness by speaking to various guests from deep thinkers, to cultural figures - in an effort to find some answers.

“I spend so much of my life thinking about this stuff - singing about love, heartbreak and relationships,” says Stone. “As an entertainer, it’s basically my job to hand out a little dose of happiness - however fleeting that may be. I want to dig deeper into the what, why, and how of this emotion we call happiness. So, on this podcast, we talk to many different characters coming from different backgrounds and perspectives. In this first season, my guests include a doctor of happiness, a musician, an illusionist, a political warrior, and a mind over matter master.”

Joss Stone is a Grammy and Brit award-winning artist who has been captivated by soul music since she was a little girl. Known for her triple platinum selling album ‘The Soul Sessions’,  to ‘Mind Body & Soul’ and ‘Water for Your Soul’, which achieved the number-one reggae album on release and was voted best reggae album by Billboard, Stone has sold over 15 million records worldwide and had the pleasure of working alongside musical royalty and legendary artists such as: James Brown, Herbie Hancock, Stevie Wonder, Gladys Knight, Sting, Van Morrison and Melissa Etheridge, amongst many others.

In addition, she’s collaborated with and contributed to albums for many of the world’s finest musicians, including Jeff Beck, Mick Jagger and Damien Marley and has starred in THE TUDORS, GRACIE & FRANKIE and EMPIRE.

A Cuppa Happy is set to air on August 10 and will be streaming on all podcast platforms including Apple Podcasts and Spotify. Top guests include: ​

To listen to the podcast, visit https://play.acast.com/s/a-cuppa-happy, or find it on Apple Podcasts, Spotify and all major podcast players.

New Black-Owned Fitness Brand CYCMODE Introduces an Immersive and Integrated Fitness Experience for the Culture … and Its About to Get Real, Literally
Live, digital and on-demand fitness studio will feature a cinematic video experience, indoor cycling on bikes that move, strength training and yoga — all with a serious bounce to it
Studio Twenty Five Consulting - Dec 1, 2020