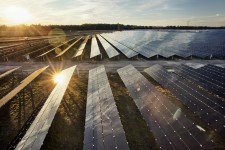 WASHINGTON, February 7, 2018 (Newswire.com) - Sol Systems, a leading independent solar asset manager and developer (Sol), and Nationwide, a Fortune 100 financial services and property & casualty company, today launched a joint venture, Helios Infrastructure Fund (Helios). Helios’ initial objective is to acquire, develop, build, and own over 330 MW of utility and commercial solar assets throughout the United States in the next 12 months, with an aim to expand the platform thereafter.

In partnership since 2012, Nationwide and Sol have financed over $700M of solar projects throughout the United States to date. The portfolio is primarily composed of distributed utility assets selling energy to municipal customers, universities, and utilities. In 2018, Helios will leverage the origination, underwriting and asset management resources the two partners have established.

“Our partnership is focused on leveraging the deep understanding Sol Systems has developed of the nation’s energy infrastructure and help transition it to a more dynamic, resilient, and sustainable future,” said Yuri Horwitz, Chief Executive Officer for Sol Systems. “Helios is the next phase of our partnership with Nationwide, and the next step in our ability to drive this change.”

Sol Systems is a leading independent asset manager that develops and invests in solar infrastructure in the United States. The company was founded in 2008 and is primarily employee-owned. Sol Systems creates and implements tailored solar energy investment and procurement solutions for some of the largest companies, municipalities, and universities in the United States. The company is based in Washington, DC. For more information, contact Charity Sack, charity.sack@solsystems.com; 202.588.6455. www.solsystems.com

Nationwide, a Fortune 100 company based in Columbus, Ohio, is one of the largest and strongest diversified insurance and financial services organizations in the U.S. and is rated A+ by both A.M. Best and Standard & Poor’s. The company provides a full range of insurance and financial services, including auto, commercial, homeowners, farm and life insurance; public and private sector retirement plans, annuities and mutual funds; banking and mortgages; excess & surplus, specialty and surety; pet, motorcycle and boat insurance. For more information, visit www.nationwide.com.

Sol Systems is a leading independent asset manager that develops and invests in solar infrastructure in the US. Since 2008, Sol has delivered over 650MW of solar for Fortune 100 companies, municipalities, utilities, banks, and universities.