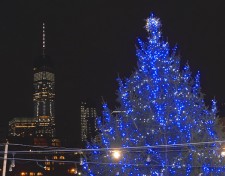 SoHo Trees, a well-known fixture in SoHo Square Park every December, had to relocate this Christmas season due to an ongoing park construction project. The Christmas Tree company, which has been serving the New York City area for over 30 years, was able to secure a brand new location for this season at the very last moment. A new lease agreement has given the Christmas Tree company the ability to continue to serve the community they have become such a part of over the years. The new flagship tree farm stand is located just a few blocks down the road from SoHo Square Park, which they had previously occupied every December for over 25 years.

We welcome all New Yorkers to come down and see this absolutely beautiful tree. Our goal was to create a little downtown Christmas oasis for people to come and enjoy this holiday season. Nothing beats the fresh aroma of Christmas trees in the city! Feel free to swing on by and take a photo in front of this magnificent tree!

The spectacular tree illuminates the sky with its bright blue lights and flashing star on top. The Christmas tree was decorated by acclaimed holiday designer Nando DiMeglio. The tree will be lit every night at sundown, creating a bright blue glow that can be seen in the distance in all directions. Santa Claus will be on-site during the weekend for photos and to hand out candy canes to the kids.

The breath-taking 30 ft. Norway Spruce was generously donated by the Halka family of Halka Nurseries. Halka Nurseries is the country's premier grower of specimen trees, growing over 200 varieties of trees on 2,500 acres in central and southern New Jersey. The tree was sourced, transported and installed by SoHo Trees in-house professional horticulturist, Michael Jackus. SoHo Trees would like to thank the Halka family for the majestic tree and Jamie Gaunt, Vice President of Halka Nurseries, for coordinating it.

SoHo Trees welcomes all of New York to come down to see the festive holiday sights in person. SoHo Trees hopes to provide New Yorkers a Christmas Tree destination, without having to battle the holiday crowds of midtown.

From SoHo Trees to all of you ... we wish you a Merry Christmas! 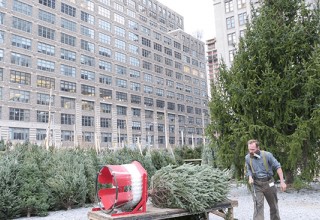 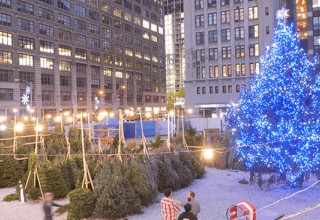 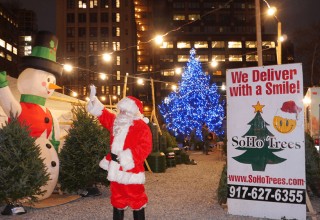 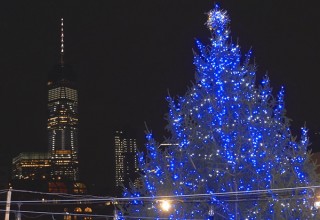