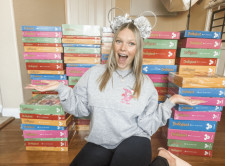 CHULA VISTA, Calif., November 29, 2021 (Newswire.com) - While California recently grabbed headlines for the announcement of the opening of Disneyland, there is something exciting cooking up online too which has attracted massive attention from Disney fans as well. Talk about the latest buzz in the social media space and the internet is going ga-ga over the viral Disney Diorama videos created by popular social media influencer Kayla Freitas. The videos have garnered millions of views on YouTube, Instagram and TikTok, and have commanded huge attention from Disney fans not only in America but also all across the world.

Kayla has recently purchased a whopping set of 100 boxes that, when opened and put together, make up a tiny replica of Disneyland. In the inaugural video of her latest Disney Diorama series, Kayla showed the audience those 100 boxes and also announced to open them one by one in the following videos. The first video of the series garnered millions of views on TikTok in the first couple of days. In each of the following videos, Kayla showed how to unbox the contents of the Disney boxes and how to arrange the pieces together to create a tiny replica of Disneyland right on your coffee table.

As of now, Kayla's Disney Diorama videos have received over 5 million views on TikTok. In fact, the Disney Unboxing series also generated over 200,000 new followers for her and the TikTok star has just hit a milestone of one million followers.

"I am thrilled with the amazing response I have received for my Disney Diorama videos over the last few weeks. I thoroughly enjoyed shopping for the 100 boxes, and it was a different joy altogether to unbox them, and of course, share the whole excitement with you all," stated Kayla.

The second video of the Disney Diorama series shows Kayla unboxing box 1 of the 100 boxes. The box contains a set of beautifully detailed parts, which when pieced together went on to create a spectacular Disney castle. The box also has a miniature of everyone's favorite Mickey Mouse.

Speaking on, Kayla stressed one of the major reasons why her Disney videos resonated with Disney fans all over is because they had been missing the wonderland over the last year and a half. And her videos possibly offered them a much-awaited glimpse of the magical place which jostled up their fond Disneyland memories or upcoming plans to visit Disneyland.

"The Disney boxes are really cool; however, the coolest part was to unbox them and churn up a whole miniature version of Disneyland right in your living room."

Kayla Freitas is an American TikTok star who is best known for her mother-daughter collaboration videos. Their account is called TravelMomoirs which has gained over 1 Million followers on TikTok. Kayla is also popular over YouTube and Instagram. In addition to her TikTok page, she has a popular vlog at TravelMomoirs.com as well. Kayla is mostly famous for her videos on travel, beauty, and lifestyle topics.