Noted actress, voice over artist and fashion blogger Vida Ghaffari (The Mindy Project, Jimmy Kimmel Live) had the exclusive, jam packed launch party for her self-titled blog, www.soveryvida.com, at the glitzy W Hotel in the heart of Hollywood. Ever the media maven, Vida hosted the event in conjunction with www.theworldnetworks.com, which was founded by savvy entrepreneur Lousine Karibian. 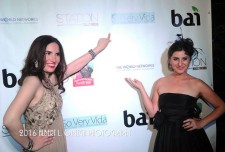 Hollywood, CA , July 8, 2016 (Newswire.com) - ​​​​All of Hollywood was a buzz, as ​noted actress, voice over artist and fashion blogger Vida Ghaffari (The Mindy Project, Jimmy Kimmel Live) just had the exclusive, jam packed launch party for her self-titled blog, www.soveryvida.com, at the glitzy W Hotel Hollywood. Ever the media maven, Vida hosted the event in conjunction with www.theworldnetworks.com, which was founded by savvy entrepreneur Lousine Karibian.

Aligning with the W was on point with Vida’s brand as she has showcased many high end events  in the luxury goods market such as the Rand Review, exclusive Oscar and Emmy Gifting Suites, front row coverage of LA Fashion Week, The Film Fashion Awards and countless other high-tier, private events. “Hollywood is such an integral part of my career and I'm honored that I got the chance to collaborate with Lousine, The World Networks and the W for this event. Lousine is a real visionary and she has created such a wonderful organization that really empowers all types of entrepreneurs especially women, which is what I strive to do with my blog and in all aspects of my media career. More than anything though, I was touched by the support of so many friends and colleagues coming out to support me. Though I do go to events as a blogger, it can often be a very solitary experience as it is full of deadlines and mastering word press and constantly in a state of follow up and pursuit of what is timely and blog-worthy. So to see all my fabulous guests there for me, on a very warm night in Hollywood, with at least 6 big events going from the Paley Center, to a Zac Efron premiere, and even a Paris Hilton perfume launch, well, I’m truly excited and grateful for all of this warmth and support. I also wanted to thank the lovely ladies at the LA Fashion Magazine as well as the staff from Malin + Goetz, who stopped by as well as my amazing hair and makeup teams, Maryam from Chic Look, and Jade and her wonderful Moonstar Cosmetics and Starving Artists Project team,” said Ghaffari. Vida was dressed in a Sue Wong gown, her hair was by Maryam Motaghy of Chic Look Salon in Valley Village, CA. Vida’s head makeup artist was Jade Martinez, founder and CEO of Moonstar Cosmetics. She was assisted by makeup artists Lilia Yeremyan and her sister Sher Yeremyan, who is the owner of Mazi Salon in Glendale, CA.

"Of the hundreds of events in the past 10 years, it has always been on the back of mind to work with a go-getter like Vida Ghaffari and to have her as an Ambassador (of The World Networks) is a dream come true and to collaborate with her was a great experience. If you're looking for a world class blog with world class writing, www.soveryvida.com is it!"

Lousine Karibian, Founder and CEO of The World Networks

Born and raised in the DC area, Vida Ghaffari comes from a long line of renowned diplomats, scholars, actors/directors, writers, and poets and knows her way around high-end fashion and glamour. Vida wants to uphold the family tradition through the arts and the media. She has been active on the Tinsel town scene as an accomplished actress, journalist, a voiceover artist, and industry insider. With her rich, smart, and sassy signature voice, Vida works steadily as a voiceover artist. Vida recently voiced two characters in the award-winning animated film “Lovesick Fool” created by Emmy-nominated director Dominic Polcino (“The Simpsons,” “Family Guy,” and “King of the Hill”). Acclaimed actors Fred Willard, Lisa Kudrow, and Janeane Garofalo also voiced roles in this film. This comedic powerhouse landed a great co-starring role in Mindy Kaling's humorous and much buzzed about show "The Mindy Project." She has also starred in Comedy Central's "Mind of Mencia". These projects cap off a number of successes for the versatile starlet. She will soon be shooting a supporting role in multi award-winning filmmaker Gregory Hatanaka's "Darling Nikki" alongside James Duval ("Independence Day,"Donnie Darko"), Kristine DeBell ("Meatballs"), Mel Novak (Bruce Lee's "Game of Death,""Black Belt Jones") and actor/director Thomas J. Churchill ("Checkpoint," "Lazarus: Day of the Living Dead"). She will also star in two films directed by Churchill as well as "Copperhead Creek" opposite James Van Patten (of "Saw" fame), which is a western by Rick Groat. Vida is also nominated for a Best Actress award at the coveted Love International Film Festival which starts today. Vida's multi award-winning blog was named by On Trend Magazine as a blog to watch. More info about Vida via facebook, twitter, and instagram at her handles @VidaGhaffari and @soveryvida. More info about Vida at www.soveryvida.com

ABOUT THE WORLD NETWORKS:

The World Networks is, as its name implies, an international networking group created and developed by its CEO Lousine Karibian in 2011. To its immense credit, this networking group has members from nearly every country on the globe. Karibian is also the CEO and founder of The Armenian American Network (TAAN), which she started in October, 2010. After she had founded TAAN, Karibian’s contacts from different backgrounds asked her, “Could you do this for our people as well?” And so was born The World Networks organization to bridge various ethnic and geographic communities. Not only is Lousine Karibian the entrepreneur’s entrepreneur, but she is also most certainly the net worker’s net worker, having built her company, The World Networks, into a truly global enterprise. She is also a terrific marketing person, as her clients will attest. More info via facebook and instagram at her handle @theworldnetworks and at www.TheWorldNetworks.com

ABOUT STATION AT THE W HOTEL HOLLYWOOD

The elegant yet hip W Hotel is in the heart of Hollywood. Step outside and discover Station Hollywood, located just outside of the Living Room at W Hollywood and adjacent to Hollywood Boulevard. More info at http://www.whollywoodhotel.com/station-hollywood-bar