Also raises Seed round of funding 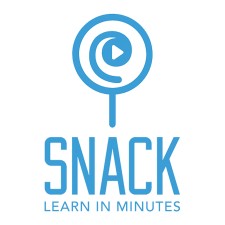 SEATTLE, September 24, 2018 (Newswire.com) - Snack Video Technologies, a new artificial intelligence-powered, e-learning startup today launched their short-video-based app Snack, as well as announced their Seed round of funding from and cooperation agreement with Sogou (NYSE: SOGO). The agreement with Sogou will enable Snack to improve the user experience through Sogou’s industry-leading AI technologies.

“People both need and want useful information in an instant,” stated Sunny Wu, CEO of Snack Video Technologies. “Snack does just that. Our short-form videos are creating a new standard of story-telling, enabling people to learn something in minutes so that time is no longer a barrier and people are actually maximizing their time, through the rapidly growing mobile space.”

People both need and want useful information in an instant, Snack does just that. Our short-form videos are creating a new standard of story-telling, enabling people to learn something in minutes so that time is no longer a barrier and people are actually maximizing their time, through the rapidly growing mobile space.

People inherently strive for more knowledge – always wanting to better understand the world around them and beyond. But, now busier than ever, it has become increasingly difficult to consume meaningful information. People simply don’t have as much time to sit down and read a book or scan through every page of the newspaper. Our society is evolving to find new ways to learn – two decades ago, a mere 12 percent of people got their news online. Now, that number is over 80 percent with 72 percent using their mobile device to obtain this information. People are now using their wasted, fragmented time, such as waiting for the bus, eating lunch, or sitting on a train, to quickly learn more about what they care about most.

Along with the rise of the Internet, videos have increasingly become a way to find and digest information. An incredible 45 percent of people watch more than an hour of Facebook and YouTube videos every week with over half of all video content being consumed on mobile.

At no cost to them, people can use Snack to both create and view short-form videos. Later this year, Snack will be rolling out an incentive program for creators and influencers; Snack’s goal is to have an entirely creator-driven service. Snack’s initial funding will primarily for content acquisition and product development.

Wu continued, “In just a short period of time, the Snack team has created something that has the potential to forever change how we gain knowledge. I can’t wait to see where this can take us.”

Snack also lets users share what they are good at by recording a short video with simple steps and get rewards.

Snack is an innovative and adaptable way for people to learn in this fast-paced era. It’s a mission that takes some seriously smart, intense curiosity and determination to be the best.

Snack is a mobile app delivers short-form videos to help you learn things in minutes.