Those focused on a quality retirement should be thinking about their brains, as well as their bodies 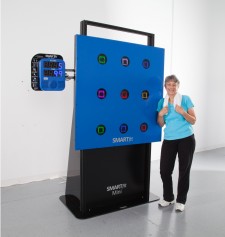 CAMARILLO, Calif., October 2, 2019 (Newswire.com) - In its February 2019 issue, a Time magazine article described the current aging trajectory of baby boomers as the “growing American crisis.” With 10,000 Americans retiring every day and expecting to live much longer than every previous generation in human history, thoughts of how society will take care of them are unprecedentedly vexing.

One innovative company in Southern California, SMARTfit Inc., has taken proactive steps by helping this famously defiant generation to remain cognitively sharp even as they enter their 70s and beyond. SMARTfit cognitive-motor training programs focus on simultaneously training the brain and the body (cognitive-motor dual-task training), based on growing research in the field of orthopedic and neurological rehab, wellness and fitness training.

A recent case study adds to this body of research by demonstrating that an aging person can slow cognitive decline with the right kind of exercise. To test the effectiveness of SMARTfit’s dual-task training, SMARTfit recruited a 70-year-old retired school teacher, Leslie Brtek of Santa Barbara, to test this idea over a six-week trial using the Cambridge Cognitive Assessment test to evaluate and validate her progress.

Upon determining the less-proficient areas of her cognitive profile using this test, the SMARTfit dual-tasking program was customized to focus on activities that would target those areas. These activities involved exercises for visuospatial working memory, impulse control and planning. The exercises included hitting targets with either the left, right or both hands according to a visual cue, finding a smiley face hidden among other non-smiling emojis, matching complex shapes using short-term memory, and hitting one target while searching and avoiding hitting other false targets.

While these tasks were being engaged, complex movements, such as alternating lateral lunges, single-leg reaches with balancing, cardiovascular stepping, and gross motor patterns using balance implements and weights were implemented simultaneously.

What was most surprising about the results was that the subject was already a regular user of SMARTfit’s programs, which she described as having helped her become “sharper and quicker.” Such remarkable cognitive improvements in a relatively short time were not expected with someone who had apparently already benefited and enjoyed the initial benefits. It appears that increasing the intensity and variability of the cognitive-motor exercises over this study period further boosted cognitive improvements in the areas that were specifically targeted.

“I’m excited to learn that brain plasticity doesn’t slow or stop with age if we work at it,” said Brtek when she saw the results. “And I feel much more confident and positive about my ability to stay in control of my life as I move into my 70s.”

The founder and CEO of SMARTfit Inc., Cathi Lamberti, was equally encouraged but not surprised with the results and what they imply for her company.

“We want to provide hope for the 10,000 baby boomers turning 65 every day that want to do something to ensure they get the most out of their retirement,” Lamberti said. “I am confident we have an answer that is not only effective but also fun to do. I consider the fun aspect to be as important as the actual exercises themselves as it helps to boost endocrine health as well as stave off depression and loneliness.

Our small group exercise programs designed for retirement facilities and fitness clubs are hugely successful at improving social connection as well.  SMARTfit players can choose to work out alone at their own pace or join a class and have fun while they work out.”

A serial entrepreneur of many years, Lamberti started SMARTfit Inc. in 2013 after gaining experience from earlier projects in the same space and absorbing the latest research on the power of “dual-tasking” and improving brain plasticity with exercise. SMARTfit has created a technology platform focused on getting people to work out in a way that simulated how we evolved, with the added benefit of allowing for total customization of the cognitive and motor demands placed on the individual. This way, the evidence-based feedback can both track performance and guide the pace of the workouts to keep exercisers working out in the flow while avoiding becoming overwhelmed or bored with the program. 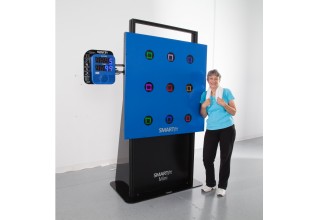 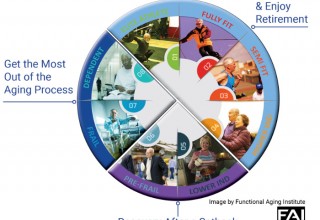 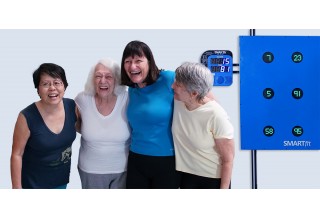