Small Business Defaults in Washington Down in May 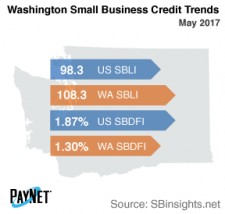 Chicago, IL, July 25, 2017 (Newswire.com) - ​In May 2017, fewer Washington small businesses defaulted on existing loans, according to data released by PayNet. However, of the 18 major industries, only 8﻿ declined in the state.

At 108.3, the PayNet Small Business Lending Index (SBLI) for Washington surpassed the national SBLI level (98.3) despite ﻿declining by 0.6% from the previous month's state level.

"More definitive trends are needed to gauge the future economic performance for Washington," states the president of PayNet, William Phelan.