Small Business Defaults in Pennsylvania Up in January 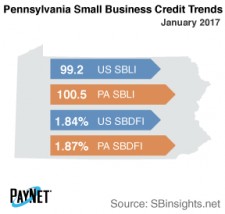 Chicago, IL, March 13, 2017 (Newswire.com) - PayNet, the premier provider of credit ratings on small businesses, states that﻿﻿﻿﻿ in January 2017 overall defaults increased among Pennsylvania’s small businesses, with default rates in 14 of the 18 major industries rising in the state.