Small Business Defaults in Georgia Down in May 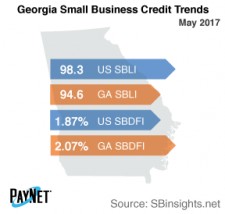 Chicago, Ill., July 24, 2017 (Newswire.com) - In May 2017, the percentage of Georgia's small businesses defaulting on existing loans has fallen, with default rates in 11 of the 18 major industries falling in the state, data issued by PayNet shows.

PayNet's Small Business Default Index (SBDFI) for Georgia registered at 2.07 percent after a 4 basis point reduction from April. Compared to the national SBDFI level of 1.87 percent, Georgia's SBDFI was 20 basis points greater. Financial health is weaker than a year ago in the state despite the recent downturn in defaults. Over the last year, the national SBDFI rose 19 basis points, which was a much greater increase than the 5 basis point increase ﻿exhibited by the Georgia SBDFI.

The industries with the highest default rate﻿ in Georgia were Transportation and Warehousing (5.06 percent); Information (4.13 percent); and Agriculture, Forestry, Fishing and Hunting (3.55 percent). Nationally, Transportation and Warehousing had a default rate of 4.59 percent, with a difference of +0.99 percent compared to the prior year, while Georgia had a variance of +0.26 percent.

Georgia's PayNet Small Business Lending Index (SBLI) came in at﻿ 94.6, ﻿﻿declining 0.2 percent from last month's state level, and 3.8 percent below the national SBLI level of 98.3 this month. Small business borrowers are being cautious regarding new investment.