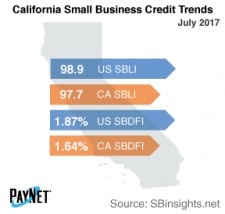 Transportation and Warehousing (4.57%); Mining, Quarrying, and Oil and Gas Extraction (3.12%); and Information (2.96%) recorded the highest default rates of all industries in California. Nationally, Transportation and Warehousing had a default rate of 4.57%, with a difference of +0.63% compared to the prior year, while California had a variance of +1.14%.