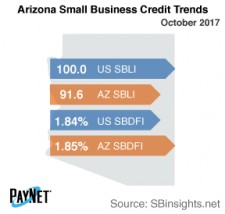 CHICAGO, December 18, 2017 (Newswire.com) - In October 2017, small business loan defaults remained unchanged in Arizona, according to data announced by PayNet. Of the 18 major industries, 11 improved and 6 worsened.

After comparable performance to September, Arizona's PayNet Small Business Default Index (SBDFI) at 1.85% was on par with the national SBDFI level. Over the last year, both the Arizona and national SBDFI rose 2 basis points.

The industries with the worst default rates in Arizona were Transportation and Warehousing (4.62%); Admin & Support and Waste Management & Remediation Services (3.69%); and Mining, Quarrying, and Oil and Gas Extraction (2.67%). Nationally, Transportation and Warehousing had a default rate of 4.38%, with a difference of +0.17% compared to the prior year, while Arizona had a variance of -0.07%.

At 91.6, Arizona's PayNet Small Business Lending Index (SBLI) declined 0.2% from the previous month's state level and was 8.4% beneath this month's national SBLI level (100.0). Small business borrowers are being cautious and holding off on new investment.