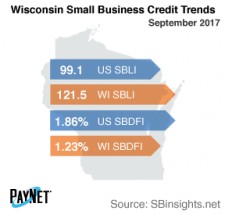 Wisconsin ranked 3rd in the country with their PayNet Small Business Lending Index (SBLI) of 121.5, which performed on par with the previous month's state level and was 22.6% higher than this month's national SBLI level (99.1).

The three industries with the most favorable change in lending activity over the past year in Wisconsin were Mining, Quarrying, and Oil and Gas Extraction (40.5%); Arts, Entertainment, and Recreation (34.5%); and Accommodation and Food Services (26.0%). As well as having the second-greatest improvement this month, Arts, Entertainment, and Recreation also recorded the highest lending activity (439.8) of all industries in Wisconsin.