SLEEFS and Miami Dolphins Linebacker, Kiko Alonso to Give Back to Puerto Rico 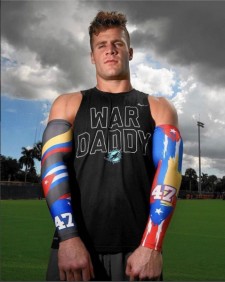 Davie, FL, April 10, 2017 (Newswire.com) - Performance apparel brand, Sleefs, has partnered with Miami Dolphins Linebacker, Kiko Alonso and the Puerto Rico American Football Academy (PRAFA) to co-sponsor a football clinic for youths on April 22, in San Juan, Puerto Rico. The clinic will be held at Ciudad Deportiva Roberto Clemente Organization and is open to all young athletes between the ages of 8 to 16, free of charge.

In support of the clinic, Sleefs will be donating an assortment of sports gear and giveaways, including The Yellow Bag campaign. The campaign, created by Sleefs is devoted to helping athletes and their foundations give back to communities. The bright yellow drawstring bags will be given out to all participants who attend the skills clinic and all items will be adorned with exclusive graphics and designs representing Kiko Alonso.

Engaging with young athletes, encouraging them to strive for their dreams and building up football in Puerto Rico is the drive behind Alonso’s decision for the clinic. As a Hispanic American, whose father was raised in Puerto Rico, Alonso’s connection to the country stands as a strong reason to give back.

The football clinic is organized by non-profit organization, PRAFA, whose main purpose is to “promote, organize and take part in activities that develop, support and educate athletes in the sport of American Football in Puerto Rico.” Bringing local players to meet and train with elite athletes in American football is just one of many events PRAFA holds.

The clinic will be held at the Ciudad Deportiva Roberto Clemente; a space that 304 acre grounds in the outskirts of San Juan and will go from 8 a.m. - 5 p.m. Lunch will be provided and an allotted time will be designated for all participants to take pictures and get autographs from the NFL players.

To find out more about Kiko Alonso, PRAFA skills camps and how to register for the upcoming skills clinic on April 22, 2017 please visit, prafa.org.

Located in Davie, Florida Sleefs was founded in 2011. The e-commerce company develops custom performance apparel and gear for every kind of athlete. Sleefs expands on the basics of active wear to provide creative and alternative pieces, improving the overall experience of its wearers. With over 200 designs catering to both adults and youth, Sleefs plans to continue to grow and break into various markets.

To learn more about SLEEFS or The Yellow Bag please visit, Sleefs.com/yellowbags​

For any further information and details please contact, Mike Garcon at 954-719-5656 or mikeg@sleefs.com.