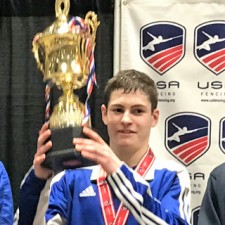 Cambridge, MA, March 1, 2017 (Newswire.com) - Nearly 2,000 of the best young fencers in the nation traveled to Kansas City, MO, to compete in the Junior Olympic Championship, this past weekend.

Robert Hondor, a junior fencer at Olympia Fencing Center, in Cambridge, takes the gold medal in the Cadet Men's Épée, not an easy feat.

Along with maintaining top grades and a rigorous academic schedule, Robert attends two -hour fencing practices five days a week at Olympia Fencing Center, where he also takes private lessons from his father and coach, Daniel Hondor, a former Romanian and European champion.

Ranked #9 in the United States, Robert started competing internationally this season and has already attended three World Cups, earning a Silver Medal as part of the US team, 14th place in the individual event in Slovakia this January, as well as a 15th place in Austria in October, 2016.

His goals for the future are centered around his passions for fencing and computer science and he plans to attend a college with a competitive NCAA fencing program. His good grades and fencing skills make Robert a good candidate for top level universities, such as Brandeis, Brown or Columbia.

Robert currently holds the best results for his age group in the New England Division of Fencing and some of the best in the country.

Olympia Fencing Center is New England's largest and most succesful fencing center.
Located in Cambridge's Highlands, a few minutes drive from downtown Boston, our center aims to introduce the Olympic sport of fencing to the masses.