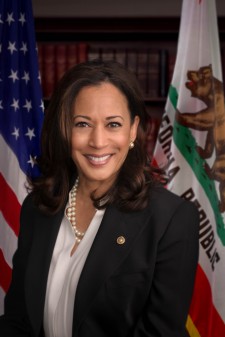 Well, Black-woman-to-Black-woman, it's time we had "the talk." Not the talk we must have with our children about the perils of being a person of color in America, but the talk Black women must have with each other and ourselves, especially when the days get tough. It is the talk that reminds us who we are and how we are all connected as Black women. The talk to lift us up on the days when we are weary from being overlooked, underestimated, and minimized. After all, we know what you've been facing as the first Black female candidate for Vice President of these United States. Regardless of political party and because we share a common belief in the goals for which you stand, as they say in the vernacular, "We Got Your Back!"

To the rhetoric, "angry Black woman," "monster," and other derogatory epitaphs hurled at you, "We Got Your Back." As any mother or sister-girlfriend would say to you and to those who would try to shut you down mentally, physically and spiritually, ignore the chatter.

We know, and historians and archivists confirm it, the African woman is the mother of our modern civilization. For centuries, Black women have nursed and raised their babies along with the babies of others. Caring for them, encouraging them, feeding them with wonderful soulful food, using our strength to release and free others and crying for too many lost children. It was a Black woman who was the human computer that ensured a man got to the moon. It was a Black woman, who by the strength of her will, would not be moved from her seat on a city bus and started a movement. It was a brave Black woman who took her own folding chair when she could not get a seat at any political party's table and became the first woman to run for President of these United States. And it is Black women who have raised powerful children alone and become public advocates themselves when our men of the movement are murdered. Never forget that you come from strong resilient ancestry and you will not be defeated by lies and character assassination.

We, SistersUnited4Reform, speak out to demand these attacks stop.

Let your skills and experience be evident and never devalued as assets.

Let your presence be awesome but never flagrant

Let your integrity be steadfast and never compromised

Let your intelligence be respected and never denied

Let your light continue to shine and never be dimmed by demagoguery, divisiveness, or delusion

SistersUnited4Reform Release Statement on Biden's Selection of Harris
A Step Ahead PR Consulting and Coaching - Aug 21, 2020