Actress/Dancer Simrin Player appears with Justin Bieber in his title video - Purpose (PURPOSE : The Movement) six years after working with him on "Somebody to Love" 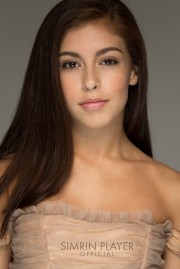 Studio City, California, November 17, 2015 (Newswire.com) - Simrin Player has been reunited with Justin Bieber in his latest and title video “Purpose (PURPOSE : The Movement) Video”. Simrin Player, an acclaimed, award winning dancer and actress, first appeared in Justin Bieber’s “Somebody to Love” video when she was eleven-years-old. She was immediately spotted as an up-and-coming dancer with a huge personality. Simrin went on to tour with Justin Bieber during his My World 2.0 U.K. Tour. And since then she has appeared in many films, videos, TV shows and live appearances.

On Saturday, November 14th Justin Bieber released “Purpose (PURPOSE : The Movement) Video” (https://www.youtube.com/watch?v=Ca1i6DZC3iY ) in which Simrin performs alongside Justin through much of the video. During the shoot the two discussed the last time they worked together and how much has changed since then. Simrin commented that: “Justin was just as nice and professional as he was when we first met six years ago. We laughed and reminisced about how much each of us has changed, yet remained the same. It was such a pleasure to work with Justin and his team again.”

Working with Justin Bieber on various projects throughout my dance career have been some of the most monumental experiences for me. I wondered if Justin would remember me because I have changed a lot since I had last seen him. Eager does not even begin to describe how I felt! When Justin arrived, I was nervous and thrilled at the same time. And to my delight, he remembered me without me having to reintroduce myself, even though I was a little peanut back then haha!! Just like in the good ole days, Justin is so fun to be around, and he makes working on set enjoyable.

Simrin C. Player was born in Salt Lake City, Utah in 1998. At age three, Simrin began training as a dancer. She and her family moved to Phoenix, Arizona in 2002. She has trained in many different styles of dance and acting. Simrin’s professional career began when she was discovered battling at a B-boy/B-girl battle in 2007 at the age of nine. This led to an invitation to audition with Hi-Hat, one of the entertainment industry’s leading choreographers and visionaries. Simrin privately auditioned with Hi-Hat for Vh1’s Hip Hop Honors Award Show honoring hip hop sensation Missy Elliot. She impressed Hi-Hat during the audition and thus appeared on television for the first time. Since then, Simrin has gone on to work with other popular and well noted entertainers including Justin Bieber, Miley Cyrus, Selena Gomez, Shakira, Will and Willow Smith, Christina Aguilera, Pitbull, Kevin Hart, Timbaland, Katie Holmes, and Adam Sandler to name a few.

Simrin was asked to perform with Willow Smith and Justin Bieber’s U.K. Tour. She performed every night in front of thousands of people in sold-out arenas throughout the United Kingdom. Simrin has built a substantial resume that includes performances in ABC’s “Bunheads”, Disney’s “Step Up 3D”, NBC’s “The Voice”, The Oprah Winfrey Show, The Ellen Degeneres Show, Nickelodeon’s Season 2 of “The Fresh Beat Band” (as Jr. Kiki), and the feature film “Jack and Jill”, starring Adam Sandler. She has performed for MTV, the Kid’s Choice Awards, the VH1 Hip Hop Honors Awards, the White House, and more. Simrin has appeared in music videos for Justin Bieber’s “Somebody to Love”, Willow Smith’s “Whip My Hair”, “Twenty-first Century Girl” and “Fireball”, Shakira’s “This Time for Africa”, and more. She has appeared in print, movie and television commercials including an extensive Sears Back-to-School campaign with Selena Gomez. Simrin distinguishes herself from her peers through her commitment to achieve perfection in all aspects of her work.

Simrin Player is an actress and dancer working out Hollywood California.