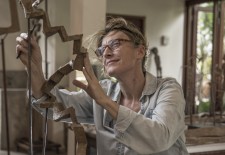 Los Angeles, CA, January 4, 2017 (Newswire.com) - ​​​At age 49, before she passed away from a tragic road accident in Thailand this past October, French renowned sculptor VAL - Valérie Goutard – was on a mission to expand her great success beyond Asia and Europe and that it was time to explore more in depth the art market that USA had to offer.

It is gallery Simard Bilodeau Contemporary that she had chosen earlier this year to present her body of work; a collection of 9 of some of her most significant sculptures to be introduced at the LA Art Show 2017.  These sculptures are the ultimate sculptures that will be available by the acclaimed artist.  Her legacy is being carried in each of her artworks, imprinted by her talent, her authenticity and her serenity forever.  It is a tribute to VAL, an homage to her heritage that Simard and Bilodeau will be presenting.

VAL’s participation at the Shanghai Art Fair 2010, together with the unveiling of a monumental sculpture named Urban Life as part of the Jing’An International Sculpture Project in Shanghai, China that established her reputation amongst renowned sculptors.  She has made her undeniable mark on monumental projects in public and private settings such as Inle Balance III and Urban Gathering for the Sofitel Hotel in Bangkok, Waiting III installed in Taipei New Times Square in 2014, and Inéquilibre in 2015, currently on display in the highest residential tower in Singapore.

In 2015, she was awarded Trophée des Français de l’Etranger (Trophy of French Expatriates).  In 2016, the exhibition “Val – Anatomy of a creative path” was presented at the museum of the Chinese Academy of Art (CAFA).  That same year, she also did an artistic and ecological project as she installed three sculptures made of concrete, bronze and coral in an underwater site on Koh Tao Island in Thailand, called Ocean Utopia, a first of its kind.

VAL was invited by the glass masters of ARS Murano to work with them in their studio on new glass creations, where she married glass, bronze and light to create a collection of unique pieces titled Tenth eonian initiative.  Another outstanding credential putting her at the highest levels of recognition as an accomplished sculptor, she was commissioned by a private collector a monumental sculptural project of over 118 feet long that will be installed in Taiwan early 2017; an assignment that she completed a few days before her fatal accident.

Simard Bilodeau Contemporary is an internationally renowned art gallery established in 2012 by French Canadians proprietors Guy Simard and Eve-Marie Bilodeau, based in Laguna Beach, CA and Shanghai, China.  They have established a strong reputation in their returned participation in prominent art fairs in USA and China, offering the works of esteemed Western artists.  Their focus has been bronze sculptures and original paintings.  2017 will be their 6th year in a row participating at the LA Art Show.