Out of more than 40 competitors, Shopin was named the winner in the 2017 CoinAgenda by investors and funds. 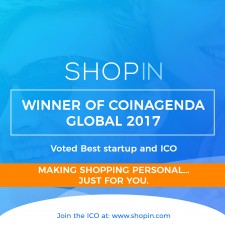 NEW YORK, November 20, 2017 (Newswire.com) - Out of more than 40 competitors, Shopin was named the winner in the 2017 CoinAgenda Global blockchain startup competition by a panel of investors. Shopin is a blockchain technology startup that is uniting the open ecommerce web and retail into a “distributed Amazon,” connected by a universal shopper profile and incentive cryptocurrency token.

Shopin has already attracted more than $2.5MM in a private token presale that is still currently underway at www.shopin.com.

Shopin enables the benefits of Amazon and sharing of a shopper’s purchase data across the web on retailer sites, thereby turning the entire retail and ecommerce web into a distributed Amazon model.

CEO Eran Eyal is quoted: “The sales should be happening on the retailers’ sites, not a central website where someone can own their users, squeeze margins, make them compete against each other at every sale and dilute incredible legacy branding. We (Shopin) give them all the benefits of Amazon data-sharing, product recommendations and consumer benefits without any of the demerits.”

From two 30-day retailer pilots, Shopin already shows substantial proof of concept: over 700,000 shoppers signed up for the service generating $14.7MM for the retailers. More poignantly, the shoppers who used a Shopin profile received product recommendations that lead to a 22 percent increase in transactional conversion over other shoppers who did not receive the Shopin product recommendations and experience.

The Shopin team comprises of lead engineers and VPs from Priceline, each of whom spent over a decade forming the core of Priceline’s technology, including the former principal engineer, VP of engineering and lead engineer. Amongst the team is serial entrepreneur Eran Eyal (CEO), and Michael Herman, former president of global sales at Elie Tahari who has held senior positions at leading retail brands such Valentino, DKNY and Donna Karan.

The 2017 cryptocurrency and blockchain-focused conference, was the largest CoinAgenda, with more than 450 guests gathering for the event in Las Vegas. The judges were comprised of individuals from top digital currency funds and angel investors.

Eyal (CEO and Founder of Shopin) was surprised to win the event: “I am surprised, gracious and humbled. The competing startups have leading blockchain technologies, solutions, and teams. I’m proud to have such a remarkable team and to be in the epicenter of such an egalitarian community that is building the new internet and being a meaningful contributor.”

Shopin aims to work with all retailers in giving historical purchase data back to their shoppers, such that shoppers become the owners of their data no matter where it is created. Shoppers can share the entire view of their preferences with retailers to enjoy the most personalized experience on every site they visit. For the first time, retailers can get a full understanding of the shopper though Shopin, to drive better transactional conversions, marketing ROI and reduce returns online and in-store.

Additional information about CoinAgenda Global can be found on their website at http://coinagenda.com.