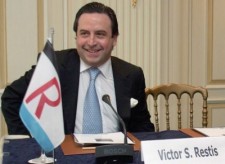 WASHINGTON, April 13, 2020 (Newswire.com) - ​Billionaire businessman and owner of Enterprises Shipping, Victor Restis, announced that he has settled out of court with The American Interest, an online journal based in Washington, D.C., after he had filed a lawsuit in the District of Columbia Superior Court on the grounds of alleged defamatory statements.

American Interest, an online publication based in Washington, D.C., settled out of court with billionaire businessman and owner of Enterprises Shipping, Victor Restis, as the latter had filed a lawsuit in the District of Columbia Superior Court on the grounds of alleged defamatory statements and false light, included in the Article "A Greek Bearing Grifts" by Alexander Clapp.

On April 8, 2020, the American Interest removed the incorrect paragraph from its Article and stated the following:

"The American Interest, a Washington DC publication in its published article written by Alexander Klapp, entitled 'A Greek Bearing Grifts' inaccurately reported the outcome of the Greek government's investigation of allegations involving Victor Restis and his family-owned bank, First Business Bank. Although Victor Restis was initially detained for several months in 2013 on suspicion of money laundering and other offenses involving FBB, the Judicial Counsel of the Athens Court of Appeal dismissed the case at the pretrial stage in the grounds that the challenged transactions were not unlawful. No charges brought against Victor Restis or his family, and the Athens Court of Appeal decided that the challenged transactions involving Mr. Restis and his family-owned bank were in fact lawful. The American Interest regrets the error of fact."

Once, the American Interest recognized the error of fact and removed the incorrect content of this paragraph, the parties agreed to settle amicably and out of court.