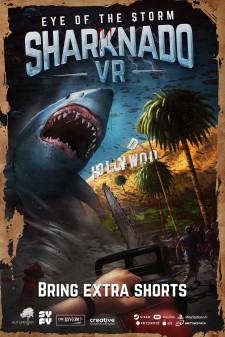 REGINA, Saskatchewan, November 7, 2018 (Newswire.com) - "Sharknado VR: Eye of the Storm," the world’s first virtual reality Sharknado experience made by Autumn VR, throws gamers into the bloody action. Download it NOVEMBER 7, 2018, on Steam for Oculus Rift and HTC Vive. It will be released on the Playstation VR Store later this year.

Revealed August 20, 2018, at the "Sharknado 6" movie premiere in LA, "Sharknado VR: Eye of the Storm," celebrates the terror and laughter of the famous fan-driven "Sharknado" movie franchise as well as adds a few new surprises not seen in the films. The over-the-top horror and comedy that fans love from the movie series translates into a rowdy game which features blood, guts, and belligerent deep-sea creatures from the "Sharknado" films.

In 'Sharknado VR: Eye of the Storm,' players find themselves in the middle of the gory action as they battle freak, fin-filled weather phenomena.

“In 'Sharknado VR: Eye of the Storm,' players find themselves in the middle of the gory action as they battle freak, fin-filled weather phenomena,” explains Dave Hansen, producer and director at Autumn VR. “It’s a great blend of humor and terror which should appeal to everyone! I mean, who hasn’t fantasized about blowing away a great white coming for them with a bazooka?”

Players fight through familiar scenarios and scenes from the "Sharknado" movies, in locales from LA to NYC to Kansas and more. "Sharknado" wranglers will save soaking-wet bystanders while dodging and clashing with sharks, jellyfish and barracudas, and even come across awesome Easter eggs along the way.