Sharing the Secret of Happiness on World Happiness Day

The Church of Scientology Life Improvement Center in Downtown Seattle and the Seattle chapter of The Way to Happiness Foundation joined forces by sharing a simple guide to better living with hundreds of people on International Day of Happiness. 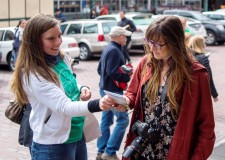 The General Assembly of the United Nations, in a resolution on July 12, 2012, proclaimed International Day of Happiness, “recognizing the relevance of happiness and well-being as universal goals and aspirations in the lives of human beings around the world.” But although the pursuit of happiness has been recognized as an inalienable right since the Declaration of Independence in 1776, just how to accomplish that goal has remained a mystery to many.

You are important to other people. You are listened to. You can influence others.

Following his sociological research in the late 1970s, author and humanitarian L. Ron Hubbard observed, “Across the planet, old social values have been broken. New moral values have not replaced them. The world of cultural dignity today is in a state of disintegration… Taught to believe he is but a beast, he is now becoming convinced that he is the helpless victim of his own passions. Almost lost is one of Man's finest intellectual abilities: to live with dignity and honor.”

His response was the 1981 publication of The Way to Happiness, a common-sense moral code whose 21 precepts can be put to use by anyone of any culture, ethnic or belief.

“True joy and happiness are valuable,” he wrote in the first chapter of the book. “If one does not survive, no joy and no happiness are obtainable. Trying to survive in a chaotic, dishonest and generally immoral society is difficult… You are important to other people. You are listened to. You can influence others… While no one can guarantee that anyone else can be happy, their chances of survival and happiness can be improved. And with theirs, yours will be. It is in your power to point the way to a less dangerous and happier life.”

With International Day of Happiness, the United Nations encourages people to be active in making this a happier world. The Seattle volunteers are part of a movement spanning 186 countries and 115 languages where individuals, wishing to make a difference, do so by sharing this guide to better living with friends, family members and total strangers.

“…by giving it, you can change the entire society,” said Mr. Hubbard. “If people were put in communication with one another and could give each other a way to happiness, yes, the world would change.”

Immensely popular since its first publication, the book has been embraced by more than 250,000 groups and individuals. The Church of Scientology and its members are proud to share the tools for happier living contained in The Way to Happiness.

Read the article on the Scientology newsroom.