Serial Kickstarter Launches a Prestigious Deck of Cards That's Sure to Get Some Attention From Card Collectors.

With nearly 30 projects completed on Kickstarter, amounting to over $140,000 in funding, this new playing card project is bound to be another success. This noble deck brings together classic elements and modern elegance. 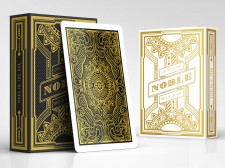 Dallas, TX, August 2, 2016 (Newswire.com) - Crate Style announced today that it is raising funds via Kickstarter to bring their latest passion project to life. The company set out to raise $10,000 on Kickstarter to produce a series of limited edition playing cards known the Noble Deck Collection.

For years, playing cards have become increasingly popular. Collectors across the world have started looking to Kickstarter for some of the hottest new decks. The Noble Deck is no exception. This timeless design brings together classic elements and modern elegance.

I love the process of collaborating with a community to create a product. Kickstarter has revolutionized the way we bring ideas and products to life.

This intricate design was the result of countless hours that were poured into this project over the course of the past three years. These cards will be printed by the prestigious United States Playing Card Company, which will assure a luxurious product, that's worthy of adding to any card collection.

Crate Style was founded by a passionate husband/wife duo in 2012. Together, they've launched nearly 30 projects and raised over $140,000 on Kickstarter. They are known for their custom prints that have been featured in stores around the world including West Elm and Weirs.