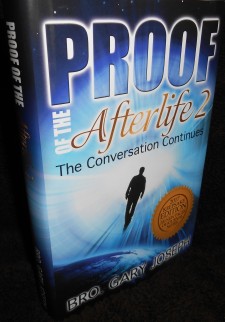 Now his newly published sequel takes readers on a journey of hope and inspiration with 200 additional, never-before-seen journal entries chronicling God-encounters and chance meetings with angels along with visions, dreams and messages from the other side.

In Proof of the Afterlife 2, Bro. Joseph writes about his continuing almost weekly God-encounters and angel visitations filled with prophecies and important messages to share with a troubled world; all proceeds from his new book are used to serve the 80,000-plus homeless in Southern California and beyond ...

Recounting his near-death experience in 2005 and the encounters that have continued weekly since then, Proof of the Afterlife 2: The Conversation Continues (2017, 400 pages) shares Brother Joseph’s message of hope and certainty that there is life after death and – drumroll, please – that this life should be filled with love, mercy and forgiveness.

The success of Brother Joseph’s first book allowed him to start an IRS 501 (c) nonprofit organization to serve the poorest of the poor, 80,000-plus living under bridges, in riverbed bottoms, on city streets, and in alleyways in southern California. Today, 200 volunteers with Servants of the Father of Mercy regularly deliver clean socks, sneakers, blankets, jackets, food, water, hygiene kits, rosaries, Bibles, love, hugs, and more to those in need.

Brother Joseph explains, “With all proceeds from Proof of the Afterlife 2 going to Servants of the Father of Mercy, this is the only NDE book in the publishing world that gives 100 percent of book revenues to the homeless.”

Filled with personal stories, anecdotes, and ruminations on spirituality and the importance of connections, Proof of the Afterlife 2 offers encouragement to anyone struggling with life challenges such as loss of a loved one, terminal illness, relationships, death and dying.

Brother Joseph explains, “Readers will discover in this new book the joy of knowing that God the Father is real, we are His children and loves each one of us very much.”

“For 30 minutes, Gary Joseph was dead. Proof of the Afterlife is a Christian and devotional tale as Brother Gary Joseph offers his own testimony to the existence of the afterlife…Of metaphysical and Christian interest, Proof of the Afterlife is very much worth considering for anyone looking for tales of real people's brushes with the afterlife.” - The Midwest Book Review, 5 Stars

Author: Gary Joseph has been a vowed Brother of the Catholic order since 2007. He is the founder of the Servants of the Father of Mercy, an association of vowed and lay members in the Archdiocese of Los Angeles. Brother Joseph’s theological training came from both Catholic and Protestant seminaries. He earned a bachelor’s degree in theology from Anaheim Christian College, also known as Melodyland School of Theology, a Master’s from Central Bible College of the Assemblies of God Theological Seminary, and 48 units of Catholic theology/philosophy from St. John’ s Seminary. He has also completed Ph.D. units of credit in Catholic Moral Law and ethics at Duquesne University. Although books of private revelation do not need approval from the Catholic church, Proof of the Afterlife: The Conversation Continues has received wide acclaim from leaders in the Catholic Church, including thank you notes from Archbishop Emeritus of the Archdiocese of Los Angeles, Cardinal Roger Mahony, and Bishop Edward Clark as well as reviews from Monsignors and priests. Brother Joseph has appeared on The Archbishop’ s Hour (Archdiocese of San Francisco) as well as Catholic Television Network (CTN) and Catholic News Service (CNS) of the United States Conference of Catholic Bishops. He lives in Southern California, where he serves a community of 80,000-plus homeless. All proceeds from the sale of Proof of the Afterlife 2 will go to the Servants of the Father of Mercy homeless mission and the St. Joseph’s Inn, a hotel conference center offering at no charge a recuperation home for homeless individuals discharged from Southern California hospitals after surgery.

Source: Mercy Books - Servants of the Father of Mercy, Inc. 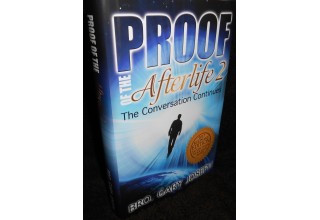 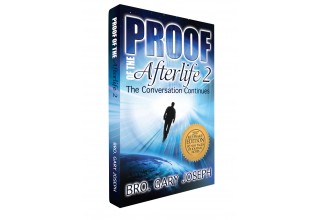 About Mercy Books - Servants of the Father of Mercy, Inc.

Following in the footsteps of Jesus . . . We invite everyone - including fishermen, the uneducated, former prostitutes, losers, the despised, rejected, homeless and sinners to join us in our mission to serve the poor in America.