WEST ORANGE, N.J., June 25, 2019 (Newswire.com) - ​​The Jewish Community Housing Corporation of Metropolitan New Jersey (JCHC) held its Board of Trustees Annual Meeting on June 17, 2018 with State Senator Richard Codey as the featured speaker. The event, held at Crystal Plaza in Livingston, was attended by board members, sponsors, vendors, staff, and residents.

The theme was “Charting the Course to Quality Senior Living” and focused on how the non-profit organization is working to enhance the lives of its residents in its four senior living communities in Essex and Morris counties: South Orange B’nai B’rith Federation House, Village Apartments (South Orange), Jewish Federation Plaza (West Orange) and the Lester Senior Living (Whippany).

The program, which followed a lavish cocktail reception, included opening remarks by event co-chair Roberta Zweifler, who thanked the organization’s long-time donors and sponsors. Rabbi Cecille Asekoff, who is retiring as director of the Joint Chaplaincy Committee of Greater MetroWest, delivered the d’var Torah, in which she spoke of the importance of keeping elders loved, valued and respected as part of the fabric of the community. Invoking Psalm 70, Asekoff referred to the work of the JCHC as a divine calling in its mission to create a caring community that brings hope, compassion and a sense of purpose to its seniors.

Event co-chair Cookie Schneiderman introduced Codey, who shared some of his legislative accomplishments during his 40 years of public service as a state senator as well as his 14 months as New Jersey’s 53rd governor. Of particular note were his remarks about how shifts in society are leading to greater isolation and depression, and the importance of senior housing as a provider of community and connection.

As always, the JCHC Choral Group, comprised of residents from Jewish Federation Plaza and Lester Senior Living, performed a selection of songs, this time in tribute to classic Broadway shows. The Choral Group is led by music teacher Ronnie Weinstein and accompanied by guitarist Barry Ottenstein, who volunteer their time to the choir every year.

Board President Brian Saltzman spoke of the honor it is to serve JCHC residents and of the board’s focus on continually adapting and improving its senior housing, and providing more of it for more people.

He shared plans for extensive renovations that will begin soon on Jewish Federation Plaza and South Orange B’nai B’rith Federation House, which will encompass all common areas and all apartments. In addition, the organization is planning to construct two new affordable housing communities, comprising 200 independent living apartments—a new green field development in Randolph and a repurposing of existing structures in Bloomfield Township.

“There is a three-year wait for apartments at B’nai B’rith Federation House,” said Saltzman. “As we navigate the changing world of senior living, the JCHC is prepared to meet the growing need for high-quality, affordable senior housing with these two developments.” A feasibility study is currently underway in Randolph and preparations are in the works for the Bloomfield project.

During his remarks, CEO Harold Colton-Max acknowledged the board leadership and members who have shown dedication to the JCHC’s mission. He also announced an increase in the minimum wage for all full-time and part-time employees, in recognition of the excellent work they do.

“Our employees have a daily positive impact on our residents’ lives,” said Colton-Max. “Their hard work plays an instrumental role in helping the JCHC continue to improve our communities and programming initiatives as we forge ahead to meet the changing needs of the seniors we serve.” 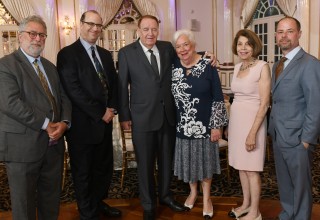 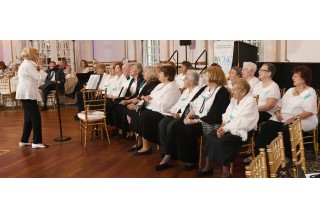 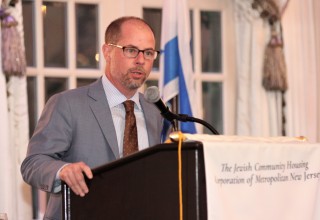 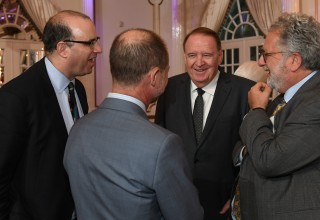