With over 160 road workers killed annually from being struck while doing their jobs, Seco invents new lighted safety vests. 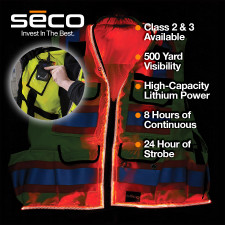 According to the Federal Highway Administration, there are around 800 work zone fatalities every year. And this number may increase as many construction companies move work to night shifts to relieve daytime congestion. But since the human eye requires light to see, the ability to perceive and judge distance is severely impaired at night. Dusk and dawn are also hazardous times for road workers. While the sky may still be lit, the roads begin to get dark, and many drivers haven't adjusted to the change by turning on their headlights. So normal reflective vests may not work.

"In the past, we worked with CALTRANS (California Department of Transportation) to develop a high-visibility vest that could keep their workers safe. They've been using it for years. But as more road work moved to night work…we knew we had to do better," said Lee Forsythe, President of Seco. "So, we developed a night vest that we hope will change safety standards and, more importantly, will save lives."

The Seco Vest comes with a high-capacity lithium power bank and fiber optic LEDS for uninterrupted continuous lighting for eight hours or strobe lighting for over 24 hours. It's available in ANSI 2 and ANSI 3 compliant versions.

SECO Precision is a leading manufacturer of accessories for the surveying and construction industries. Solving critical issues in the construction and surveying industries leads the innovation team at SECO. The Company's products are available in 75 countries, through more than 800 dealers, worldwide.