The Seattle Chapter of The Way to Happiness Foundation celebrated Friendship Day by reaching out to their community with the common-sense moral code that helps create lasting friendships by instilling decency and respect. 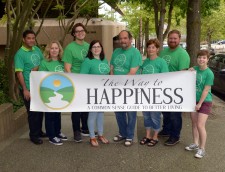 Written by author and humanitarian L. Ron Hubbard, The Way to Happiness is a common-sense moral code containing 21 basic principles for a better quality of life.

"On this International Day of Friendship, let us resolve to cherish and cultivate as many warm relationships as possible, enriching our own lives and enhancing the future."

“The Way to Happiness is part of our campaign to uplift neighborhoods in Washington State and forms a guideline that anyone can use to take charge of their lives,” said the group’s coordinator. Nonreligious in nature, this booklet is used by people of virtually every culture and creed and empowers individuals to help others and make a difference in their neighborhoods and beyond.

In each booklet they handed out, Seattle volunteers placed a flier that explained the purpose of this U.N. day. International Day of Friendship was proclaimed in 2011 by the U.N. General Assembly because “friendship between peoples, countries, cultures and individuals can inspire peace efforts and build bridges between communities.”

In his Friendship Day statement, U.N. Secretary-General Ban Ki-moon said, “When greed supersedes concerns about the health of our planet or its inhabitants, when fanatic attachment to ideology is pursued at all costs, and when people suffer human rights violations because they are considered somehow less than equal, the heritage of humanity is betrayed and our future wellbeing is placed in peril.... On this International Day of Friendship, let us resolve to cherish and cultivate as many warm relationships as possible, enriching our own lives and enhancing the future.”

Over the past year, Washington State volunteers have distributed 10,000 copies of The Way to Happiness, placing them in the hands of individuals and giving booklets to hundreds of businesses for the use and benefit of their customers.

The Way to Happiness was written in 1981. Immensely popular since its first publication, the campaign has been embraced by more than 250,000 groups and individuals, with some 115 million copies distributed in 115 languages in 186 nations.