Now you can find anything Nordic/Swedish anywhere in the U.S. 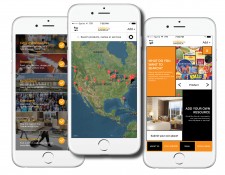 New York, NY, June 20, 2016 (Newswire.com) - Scandinavia-America’s oldest ethnic publisher has released NORDIC IN AMERICA, an app that allows you to find Scandinavian specialty products, restaurants or hotels all over the United States. Also just released is a separate app, NORDIC IN AMERICA: EVENTS with event information for hundreds of festivals and gatherings across America. Both apps are available in App Store and Google Play for public use as of today.

“The most common inquiries we receive from our growing readership and highly engaged followers on social media are about specialty products and the “who, what and where” of this ethnic community,” says Ulf Barslund Martensson, publisher Swedish News, Inc.

NORDIC IN AMERICA: EVENTS and NORDIC IN AMERICA are must-have apps when you’re looking for a specific brand or traditional ingredient — be it for a summer picnic, Christmas smörgåsbord or any other time of year. Every single word is searchable. Need a supplier of Danish modern, Dux beds or snus? Are you missing salty licorice, Freya, Fazer or Marabou chocolate or the last ingredient for Jansson’s Temptation? Maybe you’re looking for the latest among Scandinavian design stores, Swedish crystal or a group in your area to meet with? The NORDIC IN AMERICA apps allow you to find a location for the nearest cinnamon buns, traditional meatball dinner, lefse or even lutefisk.

Search by location, destination, a product or service — from Marabou to knäckebröd, from Scandinavia House, New York or a group in Wisconsin, to the Scandinavian towns of Kingsburg, Rockford or Bryn Athyn. Search for anything. If it’s available you’ll find it on the NORDIC IN AMERICA app.

You can also build the community by adding your own business, favorite place or service, and inviting new members to a group. Share your offer or the hidden treasure you’ve found with the greater Scandinavian community in the United States. It’s a click away.

To ensure ease of use and facilitate updates of listings by users, each app has its online equivalent where all listings are equally accessible.

The apps were released by one of America’s most successful classic ethnic publishers, Swedish News, Inc., producers of Nordic Reach magazine and the Nordstjernan newspaper. What started as a source of news and community for the Scandinavian immigrants in America in 1872, is now the oldest continuously published ethnic newspaper of the Swedish American community; Nordstjernan has been adaptable and in tune with its readership, which over the decades (and centuries) has added many generations of Swedish Americans; it’s not surprising that behind the success of the newspaper is its stalwart, faithful and innovative Swedish-ness. Nordstjernan hasn’t just survived, it’s thrived.

In the words of Kenneth T. Jackson, professor of history at Columbia University and editor-in-chief of The Encyclopedia of New York City, “Over the past century and a half, more newspapers were published in New York than in any other city in the world, in large part because of the huge foreign-born community and the variety of publications that the different ethnic groups spawned. Most had a brief and almost ephemeral life, but Nordstjernan has been remarkable for its long life and high quality. It not only helped Swedish immigrants adjust to life in a new world and a giant city, but it set a standard that other newspapers worked hard to emulate.”​

News agency and publisher for the Nordic and Swedish communities in the United States. Publishes books and periodicals for both print and digital.