The blind sculptor achieves his lifelong dream of "seeing" through touch, the monumental sculpture "End of the Trail." Filmmaker Jenna Winters announces the historical visit will be featured in the upcoming documentary "Dream Touch Believe." 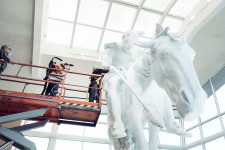 ALBUQUERQUE, N.M., October 30, 2019 (Newswire.com) - New Mexico based sculptor Michael Naranjo soared to historical career heights last week, when he became the first artist to examine the iconic End of the Trail sculpture, with just the use of his hands.

Naranjo, blinded by a grenade in the Vietnam War, said touching the masterpiece, by James Earle Fraser, was a lifelong dream.

“Somewhere in the early years of my life, before I was blinded, I saw a photo of Fraser’s End of the Trail. It left an indelible image in my mind’s eye,” Naranjo said.

The historical visit will be featured in an upcoming documentary about Naranjo’s life Dream Touch Believe, directed by his daughter Jenna Winters – a Los Angeles based television producer.

“This was a huge milestone to capture on film. It’s not every day you get to see someone literally touch their dream,” Winters said. “This is the capstone of our film – it’s a visual reminder that we should chase our dreams despite our age or abilities, until our dying day. Our world needs inspirational stories now more than ever.”

The plaster sculpture, created in 1915, depicts a Native American warrior slumped over a horse. As a source of inspiration, Naranjo has traveled the world to “see” through touch renowned pieces of artwork including Michelangelo’s David. However, End of the Trail is a piece Naranjo identifies with. Both Naranjo and Winters belong to the Tewa tribe of Santa Clara Pueblo.

“I’m realizing that at age 75, my sunset may not be too far in the distance and Fraser’s piece is symbolic to me at this time in my life as I come closer to a journey’s end,” Naranjo said. “In touching the piece, the piece touched me and I’ll carry the experience for years to come.”

When the National Cowboy and Western Heritage Museum learned of Naranjo’s dream, museum staff arranged for Naranjo to board a scissor lift and examine the monumental giant.

“We’re inspired by Michael’s story and honored that such an iconic piece from our collection will now be a part of it,” said Natalie Shirley, Museum President and CEO. “We hope this project will inspire more people as well.”

At times throughout Naranjo’s career, various museums have declined the sculptor’s requests to study works of art with his hands. Naranjo and his wife Laurie have made it their goal to share art with people of all abilities through touchable art exhibits, which often travel the country. 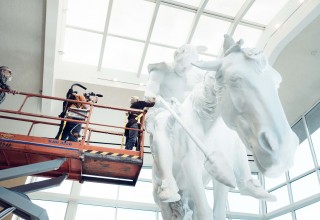 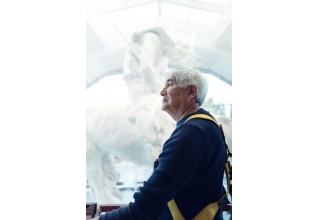 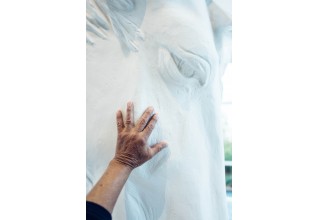