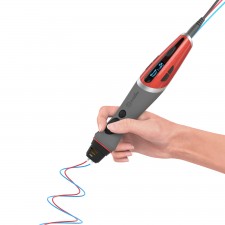 Cleveland, OH, July 5, 2017 (Newswire.com) - The world's first hand-held pen with two nozzles for creating real, three-dimensional objects from the ground up, is now available. The Scribbler DUO 3-D pen uses groundbreaking technology to incorporate two nozzles so that users can create beautiful 3-D designs with precision and ease in half the time of similar products which have just one nozzle.

Scribbler DUO works by heating and melting plastic filaments (PLA) inside the barrel of the pen. PLA is made from plant-based sources and is biodegradable. The melted PLA is then exuded from the pen's nozzles in a similar way to which a regular pen emits ink. As the user draws their object, the PLA plastic instantly cools and solidifies to become a strong, free-standing structure. Since the Pen has two nozzles, the user can create real objects and fill in the gaps in half the time of that of a pen with just one nozzle.

The team behind Scribbler DUO has launched the Pen on Kickstarter and a limited early bird deal is available. Customers that pledge $60 will receive a Scribbler DUO 3D Pen for less than half the Pen's retail price of $129.

The team at Scribbler has worked with teachers, educators, designers and engineers to bring the Scribbler DUO to the classroom. The Pen is a tool that can be used to develop children's 3-D perception, spatial reasoning and motor skills, and help with geometry teaching. It also has the potential to create new ways to aid the visually impaired.

"With our Educational Kit, students will have access to this amazing 21st-century tool at under half the current suggested retail price," said Alexander Vasilev, designer of Scribbler DUO. "Students will have an opportunity to draw in a new dimension and the educational potential is inspiring."

To find out more or purchase a Scribbler DUO, visit the Kickstarter page here: https://www.kickstarter.com/projects/675897582/scribbler-duo-the-worlds-first-dual-nozzle-3d-prin?ref=project_link

About Scribbler
Scribbler is a US-based business that specializes in creative products. The business has built four designs to date and has a customer-base of more than 40,000 people around the world. Their latest creation, the Scribbler Duo, is a culmination of their designer's passion and their customer's requests for an innovative Pen that builds 3-D designs with precision and ease.